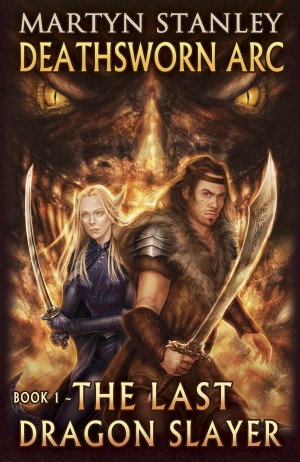 Instead of leading a large band of soldiers, archers and spell-casters; he sets out with two immigrant dock-workers and a homeless dwarf.

What Saul needs is the legendary 'Last Dragon Slayer' on his side, because on this deadly quest, it's not only Saul's favour with the Empress that's at stake - but also his life.

The Deathsworn Arc is a fantasy series with themes of atheism and pragmatism, it contains graphic violence and mature themes.
Recommended for readers 14+ only.

Martyn Stanley is the author of 'The Deathsworn Arc' a epic fantasy adventures series dragons. He lives near the Staffordshire/Cheshire border in England, with his long suffering wife and two small children.

Martyn has always enjoyed epic fantasy novels and began reading them at a young age, starting with 'The Hobbit', ending with 'The Inheritance Cycle' and including everything in between.

His 'Deathsworn Arc' is more than a hack and slash, swords and sorcery series. It examines, faith, companionship, morality, pragmatism and more. If the characters of 'The Deathsworn Arc' come across as strange, it's partly because they're intended to. It isn't a series which will be dragged out indefinitely, it has a beginning, a middle and a definite end.

He already has the plot for his second series forming in his head.

He sincerely hopes you enjoy reading his epic fantasy adventure series 'The Deathsworn Arc' as much as he enjoyed writing it.

If you enjoyed my free, first book, why not buy me a coffee? - https://ko-fi.com/mstanley

The Last Dragon Slayer by Martyn Stanley is the first book in the Deathsworn Arc series. Saul Karza is a wizard tasked with finding and killing a Noble Dragon. He is aided by two immigrants and a dwarf, but acquire the help of an elf and a dark elf along the way.

This story was good, but it could have used a bit of editing. I became invested in the characters as the story unfolded. It was a slow paced tale until the end, but overall a decent story.

(review of free book)
Destiny Bridwell reviewed on on March 28, 2017

I found this book free on Amazon and with a little help from Goodreads to give this book a shot. I read a lot more fantasy in my youth, but I am getting back to what I love. I have never read anything by Martyn Stanley before. The book was a quick read from what I expect from a fantasy read.
Saul is a wizard who is given a mission by Empress Jade to find and slay Noble Dragon. He takes with him a small team and goes to look for Silius Mendelson who is a known Dragon Slayer. Silius is said to be the last person to have seen the Noble Dragon. There are rights, elves, bandits, thieves, six mysteries stones and adventure all the things a good fantasy needs. It is a lighter than most fantasy I have read, but it is only the first book in the series. It is well worth the read and you need to experience for yourself. I just love some of the witty things the characters say.

The Last Slayer is a classic read in that you would get a superficial sense for coming events if I said "swords and sorcery". Naturally, this fantasy was much more. I enjoyed it. Stanley has a methodology about him, making the narrative clear and almost pointing out noteworthy tidbits when they are presented. This story is obviously larger than the book, and I do look forward to reading more. At no point were the descriptions unclear, for they were usually simple and to the crux of things. Some comma uses felt strange, however, and when the party debated things sometimes I felt transported to dungeons and dragons text boxes and rolled dice.

Well put together story, though at times it felt I was reading from an AD&D adventure campaign. Aside from that, the progression was well paced, and didn't veer off on wild tangents of obscure information. Descriptions were direct and to the point. Nothing extra needed, nor given. All and all, a really good story.

It was quite captivating, though I found the name of the novel a bit misleading: the dragon slayer happened to be the minor character. The storyline was moving towards the battle with the dragon but it was more focused on the relationship between elf Vashni and human warrior Korhan.
The journey of the group was mostly carried out by the dialogues and it gave an opportunity to learn more about characters and their opinions on different matters of course, but I was missing the more elaborate description of the scenery.
The ending left me wondering what's going to happen next. Will the dark elf be able to remove his curse? Will Korhan have enough of patience to continue his apprenticeship? What is the Empress Jade really like? What will the group encounter on their way back?
Well, I guess we'll see that in the next part :)

Saul Karza, a licensed wizard, is charge with assembling a group of warriors to aid him with the perilous quest of defeating a noble dragon, a creature that is almost invincible, manipulative, magical and deadly. The dragon - vain, blood thirsty and power hungry - threatens to bring both chaos and enslavement to Empress Jade's peoples, and it is under her orders Saul Karza accepts the challenge. The group Saul gathers are a misfit bunch, an unlikely band of characters thrown together who form uneasy alliances with each other. There are two strong dockland workers seeking fame and fortune. A former soldier of the Empire, who is a jaded and broken drunkard, wallowing in the former glory of being the only survivor from a previous dragon attack. Vortex, a homeless dwarf locked out from his underground home of Durheimholt due to an unknown enchantment. Brael a Gravian (or dark elf) who was an esteemed magical researcher but has been banished from his homeland and cursed due to uncovering a disagreeable truth that is revealed at the end of the novel. There is also Lady Vashni, a mistress elf over a century old who is a skilled warrior and knowledgeable in the magical art of whispering, but unlike Brael she has chosen self exile from her lands for personal reasons and to indulge her caprices by pursuing adventure.

Overall 'The Last Dragon Slayer,' is an entertaining read. There is plenty within the novel - it is not simply a straight forward high fantasy quest. There is action, philosophical moments, character development as well as a detailed and atmospheric secondary world against which the narrative plays out. The novel also explores an interesting learner/mentor dynamic which is unusually charged with sexual tension. The narrative is also teeming with high fantasy creatures and tropes: magic, medievalism, trolls, wizards, elves, dwarfs, orcs, hippogriffs and dragons. However, where the novel deviates from high fantasy is its focus on character development and the individual relationships within the group, which gives it a flavour of the 'sword and sorcery' genre. It is this focus on the characters personal battles that playfully subverts the high fantasy genre the novel is working within and will, I believe, become a feature further developed in the following instalment.

VERY interesting story and characters.
‘Whispering’ is a truly unique type of magic.
Great fight with the dragon and a bit more realistic than most.
One suggestion to Isis; the graphic person; I personally think the Elven ears are way too tall.
I will be buying book 2 as soon as I post this review.

You have subscribed to alerts for Martyn Stanley.

You have been added to Martyn Stanley's favorite list.

You can also sign-up to receive email notifications whenever Martyn Stanley releases a new book.