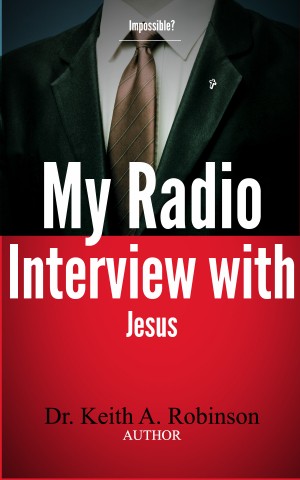 My Radio Interview with Jesus

By Dr. Keith A. Robinson
While preparing for his next nationally syndicated, radio show, America Talks Health with Dr. Keith Robinson, his producer announced a change in the guests for the next two days. The guest claimed to be Jesus, Son Of God. Keith sent his producer off for in depth research, preparing to expose the guest as a fraud, but, at the end of the second show, he found his world shaken like never before. More
Health radio broadcasting is usually somewhat predictable. Dr. Keith Robinson, the host of America Talks Health with Dr. Keith Robinson, a nationally syndicated health radio show based in Houston, Texas, interviews top doctors from across the nation and allows his listeners to call in and pose questions to his guests.

For over 500 shows the topics changed but the format stayed the same and thousands of listeners from across America just loved the show. But, one day, a guest doctor had to cancel at the last minute and Carrie, the show producer, had to fill the show time with something interesting. No one was available for this two-day slot so she booked a man claiming to be Jesus…the Son of God. Was this man delusional or a psychopath, but after years of being a journalist the bottom line was this: Dr. Keith smelled a hoax and that’s when Dr. Keith began preparing ways to expose this Jesus wannabe to his national audience of listeners.

Armed with a stack of very probing questions and the intent to clear the airways of this fraud forever, Dr. Keith prepared like never before. But, when all the smoke cleared Dr. Keith found his own world had been shaken to its core. Even with the best of preparations all any journalist can do is follow the story…and what a story it is!
Available ebook formats: epub mobi pdf rtf lrf pdb html
First 20% Sample: epub mobi (Kindle) lrf more Online Reader
pdb
Price: $4.99 USD
Buy Add to Library Give as a Gift
How gifting works
Create Widget
Tags: journalism christian living revelation loss of parent good samaritan health and happiness son and dad healing mind jesus as saviour radio doctor
About Dr. Keith A. Robinson

Reviews of My Radio Interview with Jesus by Dr. Keith A. Robinson

You have subscribed to Smashwords Alerts new release notifications for Dr. Keith A. Robinson.

Would you like to favorite Dr. Keith A. Robinson?

You have been added to Dr. Keith A. Robinson's favorite list.

You can also sign-up to receive email notifications whenever Dr. Keith A. Robinson releases a new book.