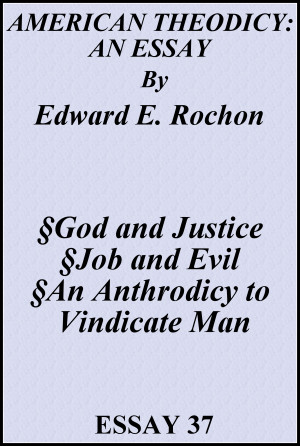 By Edward E. Rochon
Rated 3.00/5 based on 1 reviews
Theodicy is justification of evil in the world reconciled to divine power. The essay takes issue with common assumptions and offers a true reconciliation of God's power with freedom of conscience and desire. More
A theodicy that can justly be called that is proffered in the essay. The preface notes the definition and common opinions about theodicy. I claim to win a victory over God by my standard of theodicy. The first chapter discusses how freewill complicates the matter, and discusses my arguments that freewill cannot justify evil actions. The second chapter lays out my theodicy that allows evil thoughts and desires but not evil actions. Punishment consists of the perpetual frustration of evil intent without any hope of fulfilling the intent. This is consistent with the freedom innate to sentience and with the duty of God to thwart injustice. Do not complain about Abel's murder, prevent it.

The arguments only hold up if the specific god being discussed is all-knowing, all-powerful, and all-compassionate. I am not aware of any of the gods matching all three traits, so the issue of theodicy is superfluous: it doesn't exist. Natural evil happens because the laws of physics dictate that it must: the gods have no say in the matter. Human evil exists because humans are greedy, and evolved that way: the gods have no say in that evil either, since it is human nature to occasionally behave (or fail to behave) in a way that spawns evil. If the gods had anything at all to say in the matter, they would have done so by now---- they have had a few hundred thousand years to speak up and complain.

Theodicy: it is a nonsense word, and will remain so until the gods come out of hiding.