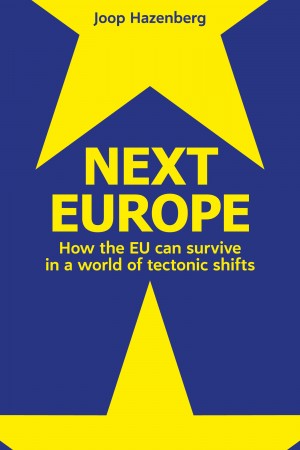 Is there any hopeful future for the European Union? Are we going to lose the race with the BRICS? Will Europeans ever truly engage with the EU institutes in Brussels?

Next Europe gives some compelling answers to the big questions of our time. ‘EU Watcher’ Joop Hazenberg, a young Dutch writer who has been based in Brussels since early 2013, takes the reader on a venture across the globe to gain insight into the position of Europe in the 21st century.

His findings are surprising. The old continent is stronger and richer than we are inclined to think. Though the EU is in a mess, so is the rest of the world. Many of the rising giants will stumble and may even fall before they can do Europe harm. But it is also true that we are no longer the coolest dudes on the planet and that new (and old) dangers threaten our security and well-being.

Based on extensive research and interviews with leading experts, Next Europe soothes the unease that looms over our future. Joop Hazenberg also formulates a bold and strong agenda for reform of the EU. If we want to survive the coming age of uncertainty and tectonic shifts, then the European Union needs a restart. Not only in Brussels, but also in the capillaries of our society.

By acting now, Europe could become, once again, a leading continent. Next Europe is the starting point for a better understanding of our world, whether you are a student, Commission bureaucrat, a voter for UKIP or a Chinese businessman.

“A spirited and courageous work” - Jonathan Holslag, Professor of International Politics at the Free University in Brussels

“Joop Hazenberg is a young thinker with the wisdom to realise that Europe has taken a wrong turn and the courage to want to change things” - Philippe Legrain, author of European Spring: Why Our Economies and Politics are in a Mess and How to Put Them Right

Joop Hazenberg (1978) is a Dutch author and researcher currently based in Brussels as an ‘EU Watcher’. He has written extensively about European integration, as well as globalisation, intergenerational conflicts and societal challenges. He has published three books Change, Dappere Nieuwe Wereld and De Machteloze Staat in Dutch. Next Europe is his first in English.

As founder of Prospect (a think-tank for millennials), established author and commentator, Joop Hazenberg is known as one of the forerunners of his generation. Active involvement with society has been a common thread through his previous roles: private secretary to the liberal faction Leader in the Dutch Parliament, EU policy officer at the Ministry of Foreign Affairs, and political editor at the daily De Pers. As well as writing he works as a freelance correspondent on EU policies, speaks at events and moderates conferences.

You have subscribed to alerts for Joop Hazenberg.

You have been added to Joop Hazenberg's favorite list.

You can also sign-up to receive email notifications whenever Joop Hazenberg releases a new book.