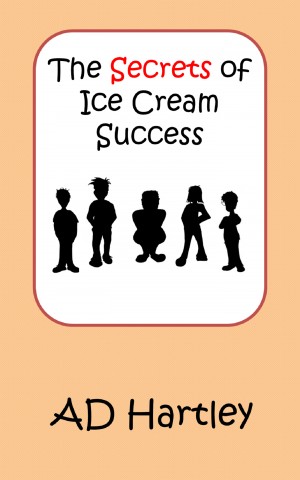 The Secrets of Ice Cream Success

By AD Hartley
Rated 5.00/5 based on 1 review
All Carlo wanted to do was figure out how to speak to girls, but now he is running the family business, dealing with sabotage, loss and a spooky book with a mind of it's own. Can he make a success of the business with the help of his friends or will he be foiled by bullies, cockroaches and family secrets? More
Carlo never wanted to take over the family ice cream business, at fourteen he already had school and the terror of talking to girls to occupy his ever anxious mind, but when the odious Haverton Hill tried to buy the factory from him after his father’s death, an unexpected sense of defiance arose.

With the “help” of his friends, Carlo sets out to cope with incompetent staff, sabotage, strange goings on in the basement, a book with a mind of its own and the knowledge that those little specks in the vanilla ice cream may not be as innocent as they seem... Oh, and he's just been asked to a party by a girl! Summer holidays were not supposed to be this interesting.

At various times he has lived in Middlesbrough, Hull, London, Kenya, Borneo, Cambodia and now lives in Kuala Lumpur.

His first book for young adults, The Secrets of Ice Cream Success, was based on a short story he wrote many moons ago, which was in turn based on an animation script written many moons before that. See, there was a point to that Animation Degree.

Reviews of The Secrets of Ice Cream Success by AD Hartley

When this book was forwarded to me, I was told that another reviewer had compared the story to that of an old fashioned kids book. I guess I am old enough to now call myself one of those kids who loved the 'old fashioned' kids books like Roald Dahl, so I was more than happy to read The Secrets of Ice Cream Success.

As soon as I began reading this story, I thought of books by YA authors such as Morris Gleitzman or Paul Jennings - books that had a dark twist. Books you read when you were a kid that seemed like a fascinating tale, yet secretly taught you a valuable life lesson between the lines. To appreciate this story, you need to remember what it was like to be adolescent.

You have subscribed to alerts for AD Hartley.

You have been added to AD Hartley's favorite list.

You can also sign-up to receive email notifications whenever AD Hartley releases a new book.