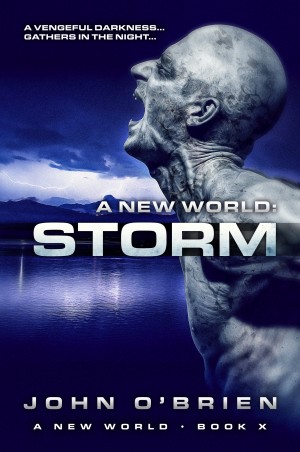 By John O'Brien
Rated 5.00/5 based on 1 reviews
Jack and the teams have won a major confrontation, but their lives still hang by a thread.
Leonard continues to keep his crew together after being hit by another soul-shattering blow. Plunging through the Pacific, he looks for answers they may never find.
Michael can no longer stand idle as thousands disappear night after night. Survival weighs heavily and he pushes forward to end the threats. More
A vengeful darkness…
Gathers in the night…

One threat has been destroyed - another grows stronger.

Even though Jack and the teams have won a major confrontation, their lives still hang by a thread. There are decisions to be made, and ones that have never been more critical.
Leonard continues to try to keep his crew together after being hit by another soul-shattering blow. They’ve only recently become aware of this new world, and it doesn’t seem to be letting up anytime soon as they silently plunge through the Pacific, looking for answers Leonard knows they may never find.
Michael knows he can no longer stand idle and wait as he feels thousands of his kind disappear from his mind night after night. The weight of the survival of his kind weighs heavily on his shoulders and he pushes forward to end the threats to their existence.

John O'Brien is a former Air Force fighter instructor pilot who transitioned to Special Operations for the latter part of his career gathering his campaign ribbon for Desert Storm. Immediately following his military service, John became a firefighter/EMT with a local department. Along with becoming a firefighter, he fell into the Information Technology industry in corporate management. Currently, John is writing full-time.

As a former marathon runner, John lives in the beautiful Pacific Northwest and can now be found kayaking out in the waters of Puget Sound, mountain biking in the Capital Forest, hiking in the Olympic Peninsula, or pedaling his road bike along the many scenic roads.

About the Series: A New World

A gust of wind…

And the storm descends…

Twilight crept across the surface, the sun dipping below the horizon. Darkness closed in, a hush settling upon the world. For most, dinners were devoured, shows watched, and alarms for the next day set.

Shrieks erupted in the night, signaling the end of civilization. Many died quickly, their last moments full of terror and agony. Others fled into the darkness, pursued by nightmares. Few survived. The world was filled with ringing alarm clocks with no one to silence them.

Sunsets were moments of escalating terror. Out of the ashes of humankind’s demise rose the night runners; death loping down darkened streets, their shrieks echoing off empty buildings. Untold Stories 2 is a continuation of short stories depicting the experiences of some who faced the fall of civilization.

A scream in the night…

And terror poured forth…

Also in Series: A New World

Mr. Obrien's series books "A New World" are some of the best Apocalyptic books I have read, but I must admit I was a little angry with the ending of "A New World-Storm" but after I thought about it for awhile it was the most logical end to finish the series. I am a grown man but it brought tears when Jack met up with Nic and she told him I told you I'd be waiting.
I just hope Mr. Obrien will continue with a new story line with Robert, Bri and Lynn carrying on with Jacks philosophy in this new world without Jack and 3/4 of the Night Runners.
Mr. Obrien Thank You for the opportunity to visit a world of your imagination. David McClain

You have subscribed to alerts for John O&#039;Brien.

You have been added to John O&#039;Brien's favorite list.

You can also sign-up to receive email notifications whenever John O&#039;Brien releases a new book.