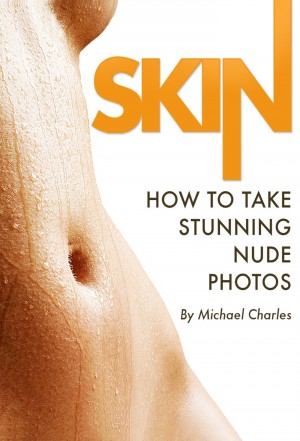 "SKIN is written in a brisk style and includes more than 100 stunning images. Every aspect of the field is covered. If you’re interested in glamour and nude photography in today’s digital age, you’ll find "SKIN" to be an invaluable resource.”

Here are just a few of the topics covered in "SKIN: How To Take Stunning Nude Photos:"

Along the way, I’ve had some good people say some very kind things about me and my work:

"Michael Charles is one of the few photographers working today with the ability to create truly remarkable images of absolutely any type of woman. We’ve featured Michael’s work extensively in our varied publications."
- Elliot James, The Score Group

"Michael has the rare skill of bringing out the sensual sides of young models while still capturing their innocence, playfulness, and true personalities."
- Louis B, Karups.com

"I rely on Michael for provocative and unforgettable images of the world’s most beautiful women. And he always delivers."
- Publisher, 30+ Magazine, 40+ Magazine

I say with a bit of pride that I didn’t learn my photography skills at a top art school like Brooks Institute or CalArts. I learned from a combination of teaching myself by reading hundreds of books and then going on to assist some of the top photographers in the world.

To give you a bit of background, I graduated with a degree in Psychology from The University of California at Berkeley. After graduation, my girlfriend and I moved down to West Hollywood and she started working in the advertising department for Guess Clothing.

These were the days when photographers such as Wayne Maser and Ellen Von Unwerth were shooting unbelievably hip black and white ad campaigns for Guess featuring supermodels like Claudia Schiffer and Carre Otis. My girlfriend would often bring home marked-up contact sheets from these great photographers and it wasn’t long before I began to think that the whole process of fashion photography was the coolest thing ever.

Since I wasn’t exactly setting the world on fire with any other pursuits, I began teaching myself photography by reading every book I could find on the subject. Looking back on things, I wish I would have thought to have my girlfriend ask Ellen Von Unwerth if she could use an assistant who would happily work for free. But instead, I simply continued to teach myself.

I eventually realized that I had learned just about all I could on my own. At this point, I sent out dozens of letters to the top photographers in Los Angeles and asked if they might need an extra assistant.

I definitely learned the most from Kal. During the time I was assisting him, he was shooting the covers (and many of the interior pages) for magazines like Muscle & Fitness, Men’s Fitness, and Shape. He was in huge demand for this type of work because of his amazing ability to light and photograph bodies in ways that make them look virtually flawless.

During these learning years, my goal was to eventually become a fashion photographer. The thought of doing nude photography never crossed my mind.

I eventually felt ready to start shooting my own stuff in the world of fashion. However, I quickly discovered that I had absolutely no interest in “women’s fashion.” Looking back on it now, it seems pretty silly. But the truth is that it never truly dawned on me that fashion photographers have to put most of their efforts into making the clothes look great. After all, that’s what the pictures are selling.

After this discovery, it didn’t take long for me to realize that what I had actually liked about fashion photography all along were the beautiful models and the boundary-pushing photography styles.

From my experience with Kal, I had learned a great deal about how to light models well and how to make women look their best. These abilities—combined with my utter lack of interest in women’s clothing—suddenly caused the world of nude photography to become very interesting to me.

I quickly began learning the process of shooting and selling this style of photography. Once again, teaching myself as I went along. Though I made my share of mistakes, I made it a priority to learn from those mistakes. I kept at it and eventually found a great deal of success in the industry.

I write my books so I can pass along to you the lessons I’ve learned over the course of my many years in the field.

I hope you enjoy them.

You have subscribed to alerts for Michael Charles.

You have been added to Michael Charles's favorite list.

You can also sign-up to receive email notifications whenever Michael Charles releases a new book.