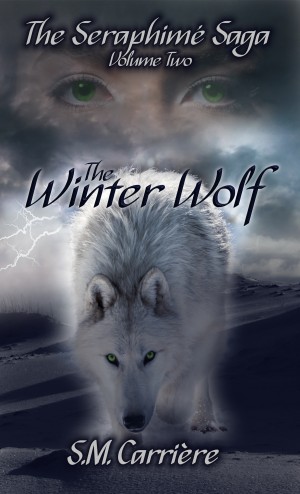 War has come. The desert has invaded. And within Seraphimé a great, primal power begins to awaken. More
War has come.

The desert has invaded.

Under the guidance of Seraphimé, Marshal of the Tundra, and her devoted consort, Bran, the formerly peaceful nations of the tundra, join with their new southern allies to fight back the invading Ottalan army.

But greater plays are in motion.

The ancient spirits of the Sierran and Greyl nations are stirring, returning to the mortal realm to battle against the ruthless god of the desert. Gods and ancestors alike stride from the shadow realms to join the fight against the mighty Desert Eagle. Ploys are made, strategies change and alliances shift as the armies clash in savage combat.

And within Seraphimé herself, a great, primal power begins to awaken.

Born in 1983 in Quito, Ecuador, S.M. Carrière has lived in five countries around the world including Ecuador, Gabon and The Philippines. The family moved to Australia from The Philippines shortly after the commencement of hostilities there in 1989.

After graduating High School, S.M. Carrière worked full time as an Office Junior at a law firm in Brisbane, Queensland before moving to Canada in 2001. In 2002 she began her academic career beginning in Criminology, but switching to Directed Interdisciplinary Studies (focusing on Perhistoric Anthropology and Archaeology) after her first year. She graduated with a B.A. Hon from Carleton University in 2007 with honours.

It wasn't until well after graduation that writing found her. She hasn't looked back since.

S.M. Carrière now resides in Canada with her two cats and a growing collection of books.

The Seraphimè Saga Book Trailer
The song is "Eamifámut" (Ancient Forces) by Berit Margrethe Oskal. Used with permission from the artist (thanks, Berit!). Order her music: http://www.beritoskal.com http://www.smcarriere.com/the-seraphimegrave-saga.html

Also in Series: The Seraphimé Saga

Reviews of The Winter Wolf by S.M. Carrière

You have subscribed to alerts for S.M. Carri&egrave;re.

You have been added to S.M. Carri&egrave;re's favorite list.

You can also sign-up to receive email notifications whenever S.M. Carri&egrave;re releases a new book.