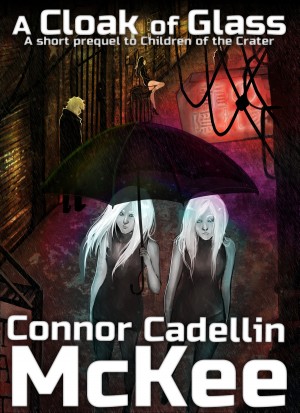 A Cloak of Glass

The world holds it breath; the clouds of war are gathering. Twin sisters Saga and Shaaya have business deep in the slums of Tankenkuro, one of the most dangerous cities on earth. The twins will need every ounce of psychic power they can muster if they are to survive the night. They are headed straight for the dragon's lair tonight, and it isn't just the humans that are watching...

Connor Cadellin McKee, named after a fictional warrior and a mythological wizard, grew up on a nomadic journey across Northern Ireland, The Isle of Man and England. Today he creates his own warriors and wizards, in the form of literary bloodbaths that people somehow agree to print.

​Writing from the age of 16, he is never one to give up on a project no matter how many years it may take- and writing books is certainly a lengthy process. He grounds his works in extensive research, and has learned a lot on his journey. From the physics of supersonic flight to the potential sociological impact of magic, it’s all there in his ungodly Asperger&#39;s syndrome memory.
​
His first novel Children of the Crater launched in 2014, chronicling the destruction of morality in a war among those with incredible powers. A sequel soon followed in the form of The Clouds of Escalion, with more to come.
​
He also wrote Tales from Aquis, set in an eponymous fantastical city at the bottom of the ocean, and the novelization of Civilization Battle Royale, a 6,000-year epic of war and politics. You can find that as well as his other stories at cadellinman.weebly.com

Wow This book is certainly worth reading if you are into science fiction, It had me gripped by the end of the second page, Really cant wait to read the rest of the story, Conner is most definitely a very gifted writer

You have subscribed to alerts for Connor Cadellin McKee.

You have been added to Connor Cadellin McKee's favorite list.

You can also sign-up to receive email notifications whenever Connor Cadellin McKee releases a new book.