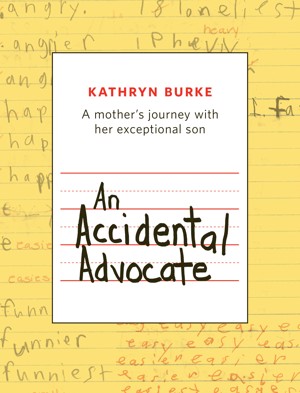 An Accidental Advocate: A mother's journey with her exceptional son

Born in Montreal, Quebec, Canada, Kathryn has an honours undergraduate and graduate degree in Sociology from the University of Calgary. She has held senior management roles in hospital administration and health policy, and has undertaken numerous consulting projects in the field of health and human services.

Kathryn has been active as a volunteer throughout her entire adult life. She joined the volunteer community dedicated to raising awareness and providing support to people with learning disabilities shortly after her son was diagnosed with this challenge. She has served as a Director and Vice President of the Learning Disabilities Association of Alberta. In late 2008, she transitioned to the role of the Association's Executive Director, a role she continues to hold. In October 2009, she launched LDExperience.ca, a website created to help people affected by learning disabilities share their experience.

Kathryn lives in Edmonton, Alberta. Her first book, An Accidental Advocate, was released in February 2011.

This is a must read for anyone dealing with a learning challenged child. A mother's journey to advocate for her child is heartfelt and honest and gives the reader sound, practical advice.

You have subscribed to alerts for Kathryn Burke.

You have been added to Kathryn Burke's favorite list.

You can also sign-up to receive email notifications whenever Kathryn Burke releases a new book.