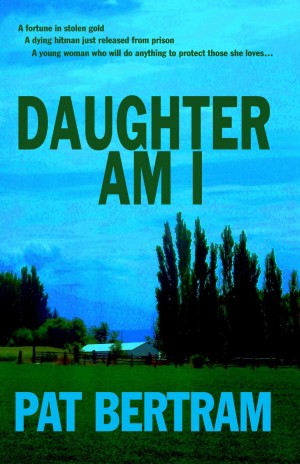 By Pat Bertram
Rated 4.50/5 based on 2 reviews
When twenty-five-year-old Mary Stuart learns she inherited a farm from her recently murdered grandparents -- grandparents her father claimed had died before she was born -- she becomes obsessed with finding out who they were and why someone wanted them dead.

Reviews of Daughter Am I by Pat Bertram

In Daughter Am I, Pat Bertram has created an entertaining tale of friendship, discovery, and mystery filled with diverse characters who are instantly likeable. Not only does she bring to life the past world of the gangster era in the current age where it is mostly forgotten, she also reminds us through her elderly cast just how closely linked the past and present really are.


Mary Stuart received a letter from a lawyer that would change her life. She learns that not only did her parents lie to her about her grandparents having died many years before, but also that those grandparents have just passed away and left her everything.

She immediately learns that her grandparents were murdered!

Driven by curiosity and perhaps a sense of self loss and the lack of direction her life has, Mary is drawn into the intrigue of finding out who these people were who her father denied her for her whole life, and the possibility of solving the mystery of their murders.

Mary begins to follow a trail she picks up at her grandparents farm, one that leads her back through their life by finding people who had once known them and finds herself travelling with an unlikely group of relics from a past era. Each stop they make in the search for truth ads another elderly person to her crew. They seem more interested in breaking the boredom of their lives and the excitement of sneaking off on a road trip than anything and yet hold the key to the secret of her grandparent’s murder.

With colourful characters, leftovers from the long gone age of the gangsters, including Lefty, Teach, Happy, Lila, and more at her side, Mary finds more than just answers. She finds more questions and love, and a direction for her life.

Daughter Am I is published by Second Wind Publishing, LLC.

This is a tale of growing. Mary is growing up, the elderly are growing older, and love is growing between Mary and all of her group. There are some marvelous life stories here, the elders have all lead amazing lives most not on the "right" side of the law. The most important lesson is that it is so important to allow the elderly to live and die with dignity. Mary manages to learn this in time to help this group and she also learns that they will live longer if they feel useful.

All in all, an amazing story and I'm so glad that someone on DorothyL recommended this book. It blew me away from beginning to end.

You have subscribed to alerts for Pat Bertram.