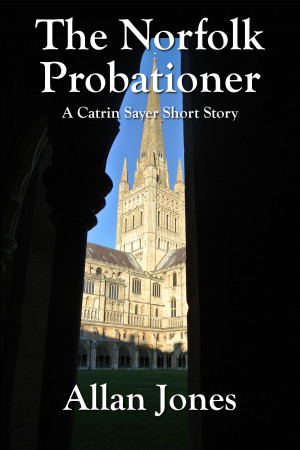 ‘The Chinese Sailor’ is the first full-length novel in the series, in which Sayer transitions from a uniform role with the Metropolitan Police to the role of detective constable. It is set largely in North Wales. ‘The Scottish Colourist’, the second novel, is about the interaction of art forgery and drug gangs and is set in Scotland. The third mystery in the series, ‘The Falmouth Model’, takes place immediately after the events in this story and is set in Cornwall. Sayer is drawn into an investigation into a bizarre Facebook attack on a university student who also models for a life drawing class.

Allan lives in Ontario, Canada but was born and grew up in Merseyside, England.He studied in North Wales (B.Sc.) and East Anglia (Ph.D.). By profession a chemist, he is now retired but he worked for many years later in his career as a consultant on international chemical regulation, a role in which he traveled extensively. He began creative writing as retirement approached.

He is currently writing a series of art-crime mystery novels featuring Catrin Sayer, a central character who is Welsh, an artist and a policewoman with the Metropolitan Police Service in London. The first novel, The Chinese Sailor, covers her transition from uniform work into the role of a detective with an art crime unit and is set largely in North Wales. The second novel, The Scottish Colourist, is partially set in Glasgow. Other novels in the same series, deal with the development of the life, career and cases of Catrin Sayer and are set in other locations, many of which the author has lived in or visited over the years.

A very well-paced little mystery. I understand that it's offered free here to introduce potential readers to the setting, characters, and writing style. If so, it certainly worked for me. I'm ready to buy the others.

You have subscribed to alerts for Allan Jones.

You have been added to Allan Jones's favorite list.

You can also sign-up to receive email notifications whenever Allan Jones releases a new book.