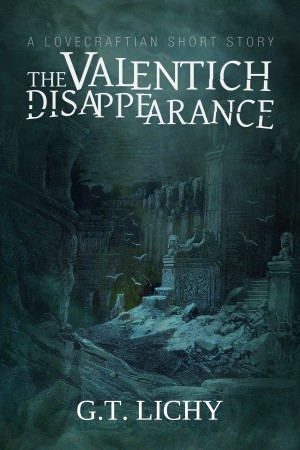 By Geoff Lichy
Rated 2.00/5 based on 1 reviews
A young pilot becomes stranded in a lost city that harbors terrifying secrets. More
A plane crash. A death cult worshiping the Elder Gods. A nameless eldritch abomination rising from the black ocean depths.

Frederick Valentich doesn't know what horrors he's about to face. A routine exercise will soon become a hideous nightmare - as he stumbles upon an abandoned city with dark secrets.

This Lovecraftian short story is based on real life events. In 1978, a young Australian pilot disappeared while on a training flight. To this day, no one knows how or why he vanished. This modern retelling shows us what might have happened in the universe of HP Lovecraft.
Download: epub mobi (Kindle) pdf more Online Reader
lrf pdb
Price: Free! USD
Add to Library
Create Widget
Tags: horror dark lovecraft cthulhu elder gods horror short story lovecraftian horror eldritch lovecraftian monsters lost at sea fiction
About Geoff Lichy

Geoff Lichy lives in New York's Hudson Valley. He's a graphic designer and photographer who has a lot of stories to share. Sometimes he makes music out of them, and sometimes he puts them into words.

I'm frustrated that I have to rate this so low, since I thought that I got at least sense of what the author was going for (though I'm hardly a mind reader), but The Valetich Disappearance falls short of expectations.

Having read a little Lovecraft before, I was intrigued at the idea of someone else tackling his ideas. That was enough to get me invested all through Part One, but the story quickly tapers off and falls flat in Parts Two and Three. The cover is VERY nice and someone proofread this short piece well – there are no typos or grammatical errors as far as I can see – but the issues lie within the content, and sadly, they are big issues indeed.

The first thing I noticed was the main character lacks personality. I just didn't get enough of his mental or physical reactions to his own adventures to even form an opinion of him. There are a lot of places where the author could give the reader insight into how Frederick sees the world, even in little ways. I felt like I was cheated out of getting to know him, and I didn't get the sense that his backstory, quirks, and motivations were supposed to be purposefully vague. I didn't need his entire character bio, of course, but I did need something to make me feel for him. For example, one thing that stood out to me was the scene in which he left a note in his plane in case anyone found it. Not all readers will think this way, but I found myself wondering what the note said. Knowing simple things like that would color in his personality without bogging down the prose with too much description. The author doesn't need to shove in that exact detail, of course, but properly placed details like it could help improve his characterization AND add to the mood of the story in my opinion.

However, the writing style is nice and readable, despite a lot of awkward wording. The passive voice and ill-placed adverbs are partly responsible for this awkwardness, so I would get a beta reader to help with that. Otherwise, I didn't get lost within long sentences and nothing was there to truly take me out of the story. Unfortunately, I couldn't actually find a means of getting into the story in the first place until I was 70% done. By “getting into the story”, I mean that I was looking for one of two things (preferably both). I wanted to either connect with Frederick and experience the city through his senses, or connect with the powerful mystery of the city itself. I wanted to feel as if I were actually there. In both cases, I think a lot more sensory description would work since I think that one of the story's purposes was to create depth for the setting and thus build up to the epic reveal of its secrets. But as it is now, Frederick lacks character, the city lacks atmosphere, and the plot lacks tension, so there was nothing for me to get invested in as a reader. It may be readable, but it's also bland. I mentioned above that there's such a thing as “too much description”, but I think that this story really doesn't have enough. The description that is there doesn't need to be removed, it just needs to be fleshed out a lot more.

As I said, though, things do pick up in Part 3, if only for a short time. Getting into the action helped me get into the story, though the conflict was far too short to really leave an impact. The ending took me aback, but I hesitate to say it did so in a good way. I get that it was probably intentional that the story just kind of stopped instead of ended, but it still left me unsatisfied in an “is this it?” sort of way.

This could have worked if it were intended as an expansion or an alternate interpretation of Lovecraft, but it feels more like an attempted introduction the Cthulhu mythology than anything else. And if I'm wrong and it's actually meant to be an alternate interpretation, there's so little new substance that it just doesn't work at all. It only barely works as an introduction, as is, since I feel like this piece requires at least a little knowledge of Lovecraft's works. The Valentich Disappearance has so much untapped potential that I can only give it two stars for not reaching it. It needs minor revisions for sentence flow and major revisions for description, plot, and character, but with a good couple rounds of editing and some new twists on the established myths, I see a genuinely interesting story coming out of the woodwork.

You have subscribed to alerts for Geoff Lichy.

You have been added to Geoff Lichy's favorite list.

You can also sign-up to receive email notifications whenever Geoff Lichy releases a new book.