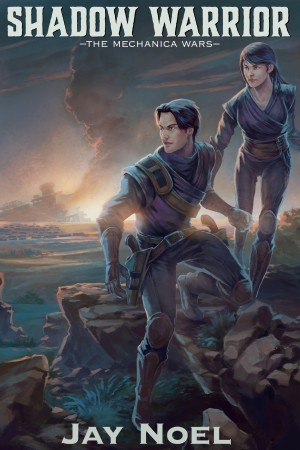 Meanwhile, the Iberian Empire sends their soaring airships and steam-powered giants into The Orient. They threaten to upset the balance of power, hoping to exploit the faraway land in their greed for the resources needed to power their machines. Zen and his companions must fight to keep the world from plunging into total destruction.

And at the center of it all is a nine year old boy with the power of a god.

After doing some freelance writing and editing for more than a dozen years, Jay decided to stop procrastinating and pursue his dream of being a novelist. He's been blogging for over eight years, and even had a comedy podcast syndicated all over the internet. All of that was fun, but all the steampunk-inspired stories in his head just wouldn't leave him alone. Jay spends his days working in medical sales, but he can be found toiling over his laptop late at night when all is quiet.

Shadow Warrior Book Trailer
The agony of a failed quest haunts Kanze Zenjiro, but the betrayal by those he trusted has turned his world upside down. With a heart full of hatred and defeat, Zen is desperate to get back to Nihon and demand the truth from his father. Meanwhile, the Iberian Empire sends their soaring airships and steam-powered giants into The Orient.

Also in Series: The Mechanica Wars

You have subscribed to alerts for Jay Noel.

You have been added to Jay Noel's favorite list.

You can also sign-up to receive email notifications whenever Jay Noel releases a new book.