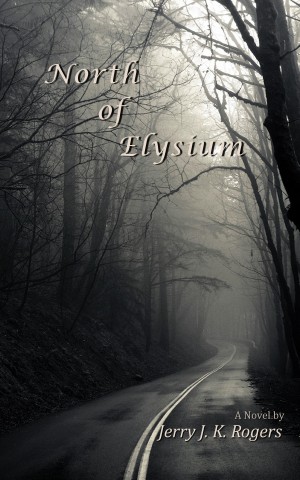 By Jerry J. K. Rogers
A teenager from Africa with the ability to track spirit possessed creatures is aided by a self-exiled religious recluse with the unique ability to read souls. The two are brought together and journey to a mysterious small town in Northern California searching for a daimon that's entered the world causing local havoc. If not successful, the ramifications are greater than both initially realize. More
Daimon (dā’ mon) - Greek derivative for the term demon; a unique and distinct malevolent spiritual influencer of man.

Why is a daimon so interested in sending the wrong persons North of Elysium?

A teenager from Africa learns he has the unique ability to hunt spirit-possessed creatures, some good, most evil. After the tragic loss of his father, he is sent on an undertaking to find a malicious daimon that has entered this world. He's aided by an exiled religious recluse from the Shoshoni Indian tribe of Wyoming who has the limited ability to read souls. The two journey to a mysterious small town in Northern California called Elysium. Here they meet an enigmatic sheriff and mayor, both at contention with one another. They learn never to go north or west from Elysium unless you're a passerby destined to travel the route. More important, they find the daimon is active in sending the wrong persons north, and must be stopped.

Jerry Rogers is a career airman working both in the United States Air Force and in the California Air National Guard, with over 26 years’ experience working in technology supporting legacy and state-of-the-art telecommunication and data-communication systems. He also worked for nearly seven years at two post-production film companies working in Information Technology. One of Jerry’s greatest joys is being able to teach at a small church in Orange County. He’s traveled extensively across the vast county to each of the contiguous 48 states and across the world to both Asia and Europe.

Ever since he was a teenager, Jerry's always had a fascination with Religion and Science Fiction and has always enjoyed writing, starting with writing short stories over the years. He took the next step and wrote a humorous novella called “The Legend of the Salad Traveler.” He later began working on his first novel, the Fallen and the Elect in 2011 developing the concept after months of research, building notes, and jotting down ideas. The story has now blossomed into a full mysterious story blending both religion and a sprinkling of Science Fiction.

See what else is brewing at his website at http://www.jjkr-writings.info.

You have subscribed to alerts for Jerry J. K. Rogers.

Would you like to favorite Jerry J. K. Rogers?

You have been added to Jerry J. K. Rogers's favorite list.