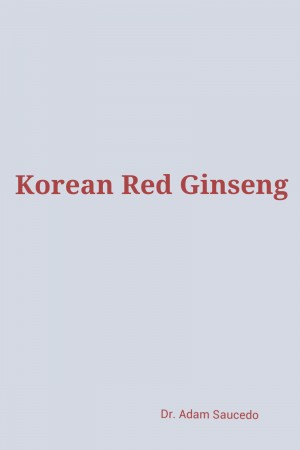 Dr. Adam Saucedo attended school at Salem College, in Salem, Massachusetts. He enrolled in the University of Rochester School of Medicine and would graduate with a medical degree in 1993. He later joined the U.S. Army and was proud to be able to serve his country by working in the emergency room while stationed in Germany. He worked on wounded soldiers returning from Europe, the Balkans, the Middle East, and North Africa. Dr. Adam Saucedo would later found the Center for Hearts, which he still runs.

I found it interesting to learn about some of the beneficial health effects of Korean red ginseng, and what makes it distinct. I'm glad I read it, but I wonder if other readers will miss it. Cover artwork is nonexistent.

You have subscribed to alerts for Dr Adam Saucedo.

You have been added to Dr Adam Saucedo's favorite list.

You can also sign-up to receive email notifications whenever Dr Adam Saucedo releases a new book.