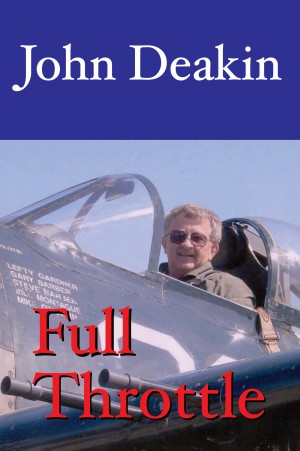 Young Deakin started as a line boy in his teens before working as a freighter pilot (B-25 captain at 19), corporate pilot, spending five years with Air America, the CIA airline, and 32 years as a captain for Japan Airlines. His last 29 years with JAL were spent Captaining the 747; the last five years of which, John was #1 in seniority system-wide.

The first half of the book tells of Deakin’s training as a budding pilot and the experiences which formed the skills he later needed to survive the rigors of flying in a combat zone. A few of these experiences could easily have been fatal, but through them all, the young aviator maintains his sense of humor about how he got himself into such a mess! There were more than a few “messes” on various continents as he learned to survive.

Deakin’s intense experiences while flying for Air America in Vietnam are always colored with the morbid humor that accompanies stressful situations. His part ownership of the Kontiki Lounge in Gia Dinh, Vietnam, presents its own special view of life “in country.” After his Air America experience, he expounds upon his experiences as an airline captain, which range from hysterically funny to the high-stress situations that accompany weather and diversion decisions as well as dealing with unruly passengers.

The later chapters of the book are first-hand accounts and detailed descriptions of what it’s like to fly some of the World’s most interesting and rare airplanes. For those who are likely to never get the chance to do so, Deakin gives them a first-hand glimpse into the details known only to those who’ve flown such aircraft as the Constellation, Bearcat, Japanese Zero, C-46, B-24, and B-29.
Available ebook formats: epub mobi pdf rtf lrf pdb txt html
First 20% Sample: epub mobi (Kindle) lrf more Online Reader
pdb
Price: $9.99 USD
Buy Add to Library Give as a Gift
How gifting works
Create Widget
Tags: flying airplanes humor stories pathos
About John Deakin

John always said “Get a job doing something you love, and you’ll never work a day in your life.” After a few attempts at actually working, mostly imposed by his father in his early teens, John eased into flying airplanes, and sure enough, found the saying to be true. He started out as a line boy in Sarasota, Florida, and began collecting money for his flying addiction by age seventeen and never looked back. He blew all of his money on aviation ratings and restaurant food, and, as a result never learned to cook beyond frozen meals and the occasional peanut butter and jelly sandwich.

John hated high school, and by his own assessment, barely made it through. He never darkened the door of college, being convinced that he’d learn more at the airport. He applied for the airlines early on, but they all wanted applicants with college diplomas and high grades at that. John railed against this at the time, but finally decided the airlines were not for him, since he’s never appreciated the union mentality. He banged around in odd jobs as a budding pilot, until he landed a job overseas for which he lusted greatly, being young, adventurous, and naive. The young lady he’d been dating for a year or so apparently had other plans for him, and was quite upset at his sudden overseas departure. John was greatly relieved, and smugly pleased to be out of that situation!

The dream job turned out to be with Air America, which John later discovered was a CIA Proprietary Airline. He spent about five years with Air America in various “garden spots” of Asia and the Pacific, had many adventures, cut a wide path through the fleshpots, and thoroughly enjoyed the massive amount of flying time in wonderful airplanes. As many Air America pilots did, John learned to do strange and amazing things with those airplanes. John has often said that that was the happiest time of his life. In 1968, Air America was failing, and the lure of jets was strong. John had an opportunity to join Japan Airlines as “Christmas Help” as a 727 captain, figuring he’d build experience for three to five years, and move on. To his surprise, his advancement to DC-8 captain, then 747 captain was very rapid. JAL was growing monstrously, and there were not enough Japanese pilots available to fill the slots. John spent the next 32 years with JAL, for the most part very happy ones, acquiring a wife and two fine sons who live and work in Seattle today. Amazingly, he only married the once, when everyone he knows has been divorced—some multiple times.

When age forced John to retire from JAL, he became a Gulfstream captain. He loved the airplane, but other issues somewhat “reduced his enjoyment.” The stress and being slightly overweight forced his blood pressure up and he suffered a stroke in 2008 at the age of 69. The after-effects of the stroke were minor, and much to his surprise he happily enjoyed being retired and now admits that he wishes he’d retired sooner. John now lives fairly reclusively with his wife in Southern California and spends his time on the business aspects of Advanced Pilot Seminars, handles a steady flow of email, and is thoroughly enjoying life, as he always has.

The Prologue mentions that he refused to write this book. "Refused" is accurate, but "too lazy" is more descriptive, and he’s amazed that Walter took the time to compile some of his stories. John hope you enjoy them, but if you don’t blame Walter, not him!

You have subscribed to Smashwords Alerts new release notifications for John Deakin.

You have been added to John Deakin's favorite list.

You can also sign-up to receive email notifications whenever John Deakin releases a new book.