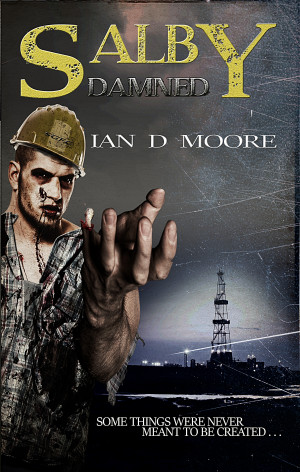 By Ian D. Moore
Nathan Cross and Evelyn Shepherd fight a multi-million dollar gas drilling corporation in a desperate struggle to save humanity from one of science's fiercest creations. There are things in this world we wish we could un-invent, this is one of them. Fast-paced graphic action/adventure with twists and turns you simply won't see coming.

I'm a 43yr old trucker for a major national haulage firm, living and working in North Yorkshire. A father to two sons aged 15 and 9 and step father to a boy and girl who feature in my first novel as smaller versions of themselves. I've been writing for many years but never published my work, usually poetry, short stories or random ideas and this first book, Salby Damned, was created mostly on my break periods while at work and originally written on a mobile phone. I am an ex army soldier, served for four years and after a serious road crash, had to leave the service but then became a trucker, been doing that now for the thick end of 17 years and still love my job. I have loved every minute of writing this first book, already released a second short story book for children and am currently working on my second novel. In the short time since publishing, I've already talked to some amazing people and been given lots of advice and tips for which I am greatly appreciative. Do please visit my web page, there will be an updated blog page shortly.

You have subscribed to alerts for Ian D. Moore.

You have been added to Ian D. Moore's favorite list.

You can also sign-up to receive email notifications whenever Ian D. Moore releases a new book.