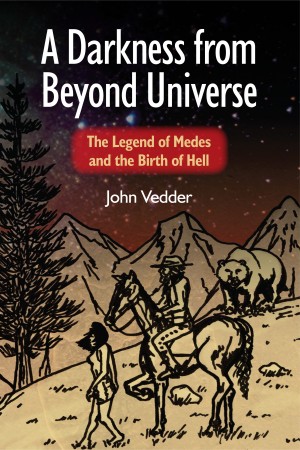 By John E. Vedder, Jr
A tiny seed of non-matter is the most powerful force in the divided Realm, and as long as the Ageless One possesses it, she and her goodness will rule all. When she misplaces that tiny seed, Medes—an Eternal Being—encounters it drifting in space at the edge of Universe and is unaware that the Opposing one in ruthlessly searching for it. More
“What’s her problem?” he muttered. Before he could delve any deeper into that quandary, the crack of the gavel summoned his attention back to the dais.

The Lord Chairman rose from his seat to his full height and, as protocol required, yelled out across the room: “This august council has reached a decision!” Looking down at Medes, he said, “You are exiled from Cadre until further notice. You—”

Medes sprang from the chair. “By the huge hairy balls swinging between the hind legs of a monstrous lumbering muzzgutt, but that’s not fair! Until further notice? And when might tha—”

The Lord Chairman slammed his gavel down this time, its eardrum rending sound reverberating throughout the bleak room. “Be silent! You are the rudest and most self-centered Eternal Being I’ve ever met!”

Distracted, the Lord Chairman shot her a reproving look. He took a moment to recompose himself then looked back down at Medes and growled, “You will be allowed to return when you can show us you have learned that Universe was not created for your sole benefit! That you have developed an understanding of one’s responsibility to others, and that the concept of that kind of responsibility despises selfishness! You are excused!”

Medes stood open-mouthed as the gavel struck the dais in a final, jarring bang.

The Lord Chairman turned to leave. He froze and looked back, his eyes boring into Medes still standing there gaping. “I said you are excused! I want you out of my sight and off Cadre within the hour!”...

John Vedder grew up in the Greater Daytona Beach Area of Florida and has lived his life there. He and his wife, Sunshine, own Vedderitaville—a riverfront home on the Intracoastal Waterway, where they have resided for eighteen years.

His current pleasures are sailing, fishing, gourmet cooking, writing, adding to his artwork and music collections, cruising with his wife and two Labradors in their pontoon boat to Disappearing Island, drag-strip racing his 1971 Dodge Challenger 440 RT, honing his long-range shooting skills with his Sharps buffalo rifle, and sitting with a cold six-pack on their dock in the evenings.

A few of his many past enjoyments were wrestling with alligators in the wild and mischievously releasing them in town; seining the shark-infested waters of Ponce de Leon Inlet after midnight for the much sought after migrating roe mullet; and hunting for and tangling with diamondback rattlesnakes in the area’s swamps and highlands. He skinned those snakes to make church neckties and hatbands for the neighborhood kids, earning him the kids’ nickname Snake Man. The skins delighted the kids, but they refused to taste any of his rattlesnake stews.

You have subscribed to alerts for John E. Vedder, Jr.

Would you like to favorite John E. Vedder, Jr?

You have been added to John E. Vedder, Jr's favorite list.