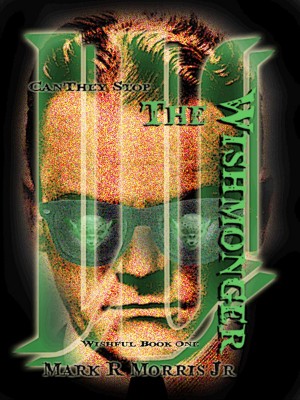 By Mark R Morris, Jr
In a town where wishing has been outlawed, a bitter blind man and a boy face off, in what may be a duel to the death, as the town hangs in the balance. Will blind Benedict and his demonic mentor succeed in destroying Wishful, or will Roger and his young friends, be able to restore the power of the wish in time to save the town and restore it's rightful history? More
In a town where wishing has been outlawed, an epic battle is brewing between two people who may have more in common than either of them would care to acknowledge, and the town of Wishful itself hangs in the balance!
Hatred rage and bitterness have twisted Benedict Pine beyond recognition. He blames the world for the loss of his sight, and, with the help of his demonic mentor, he intends to destroy the one place that means the most to the people closest to him, the town of Wishful.
Roger Pine is awakened to the danger facing Wishful in his dreams, long before he ever sets foot in the town, and he thinks he just might be the only who can stop Benedict.
In a race against time, Roger must uncover long buried family secrets, restore the town's history and find a way to use the one power that just might stop destruction in its tracks, the power of the Wish!

Mark is a professional freelance writer working out of Oklahoma City. He started his first novel at the age of fourteen, on a manual Royal typewriter he bought with lawn mowing money. The project was abandoned to technical difficulties when the ribbon broke in the middle of page 56. It was never replaced.
A former acting and voice instructor, Mark has written for both screen and stage, with five plays, three musicals, one screenplay and two short film scripts to his name. He has also published dozens of short comedy sketches, over three thousand articles and blog posts for hire, and is now (9/2014) finishing his third novel and the first draft of his third.

You have subscribed to alerts for Mark R Morris, Jr.

Would you like to favorite Mark R Morris, Jr?

You have been added to Mark R Morris, Jr's favorite list.