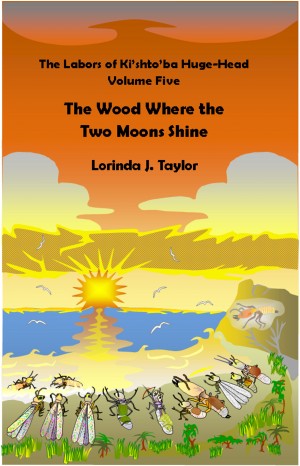 The Labors of Ki'shto'ba Huge-Head: Volume Five: The Wood Where the Two Moons Shine

By Lorinda J Taylor
Rated 4.67/5 based on 3 reviews
In the Hidden Fortress Is’a’pai’a at last learns of its origin and of the destiny for which it was hatched – to save its home from a tyrant and its evil Sorcerer/Seer. However, after the Companions complete the Quest to reach the sea, they find themselves caught up in the Quest for the Golden Fungus, which is set to launch toward the Islands of the West as the volume concludes. More
The Companions arrive at the Hidden Fortress and meet Vai’zei’a’parn, the Leader of the Yo’sho’zei, who was Is’a’pai’a’s mentor. Is’a’pai’a finally learns the story of its origin – how its egg was laid in Hwai’ran’chet at a time when that mighty fortress had come under the domination of an invading tyrant named Wei’thel’a’han. Here the treacherous No’tuk’a’nei, a power-hungry Alate Seer-Sorcerer who happens to be the hatchmate of Vai’zei’a’parn, convinced the new Commander that a nymph of a certain lineage would be the agent of its death. Since the current King of the fortress was of that lineage, Wei’thel’a’han ordered the destruction of every egg laid and every individual hatched since that King came to the Mother. In the midst of the ensuing slaughter, one egg was rescued and taken to the Hidden Fortress, where it was given to Vai’zei’a’parn for safekeeping. Is’a’pai’a hatched from this egg and now it learns that its destiny is to be the Champion who delivers Hwai’ran’chet – and its own Mother – from the clutches of the Tyrant and its evil Sorcerer.
The Companions linger in Zan’tet, where a seemingly harmless adventure ends in disaster. Ultimately, Ki’shto’ba and its Companions depart to finish the Quest to reach the sea before venturing into Hwai’ran’chet. Accompanied by the newly acquired 11th Companion, the group soon encounters the 12th, who guides them to the shore. Arriving at sunset, they can at last see the Golden Path on which they must tread.
Many prophecies will find their answer as the future continues to unfold. In the final chapter, a ship has been built and the Quest for the Golden Fungus is about to begin. The leadership of the Quest then passes to Is’a’pai’a even as the Companions learn the meaning of “The Wood Where the Two Moons Shine.”

As the end of the series approaches, the prophecies that inspire and guide Ki'shto'ba and its Companions become increasingly serious and significant. In this book, one major goal of the quest is fulfilled as the group reaches the southern sea, but another looms on the horizon. An evil character dies but leaves behind a troubling gift. At the same time, the Companions experience fascinating new ideas, inventions, customs, and foods. After five substantial books, I am still enthralled with this world and its inhabitants. I wish the journey could continue indefinitely, and I have to say I dread its ending.

Okay, if you haven't started with Volume 1 and worked your way through to this 5th volume, you'll have no idea what it's all about. Stop reading the review right now. Go to Amazon or Smashwords and start at the previous two-volume book, "The Termite Queen, Vol. 1" or at least at "The Labors of Ki'shto'ba Huge-Head, Vol. 1" which picks up events after the first book.

While an excellent addition to the epic tale of heroic alien termites, I wanted a little more to highlight Ki'shto'ba's quest's end. As the first volume of the story of Is’a’pai’a's search for the golden (fleece) fungus, it's a smooth transition into the young warrior's quest.

Yes, this is an imagining of Jason and the Argonauts. Most of the characters in the Greek myth are present and accounted for. But this doesn't need to be a deed for deed, character for character retelling. Some aspects of the Jason myth are impossible. For example, Medea as Jason's wife just won't fit into the story of neuter termite warriors. I suspect a Mother (queen) termite will stand in for Medea at some point.

Am I complaining that the epic adventures of Hercules (Ki'shto'ba) and Jason (Is'a'pai'a) are utilized as the basis for the termites' tellings? Not at all. I went to my Dictionary of Mythology to remind myself of the human equivalents to the termite heroes and deeds.

My only problem throughout the series is the con-lang (constructed language) Ms. Taylor has created. It's an impressive feat. On the other hand, it's reading a story with all the names and lots of other words are written in Urdu or Finnish. Hard to remember who is who and what is what. I got used to the main characters' names, but new characters and words introduced along the way didn't stick quite as well. This makes the book difficult to read without breaking immersion. The imaginary "translator" of the termite language text, could easily have said "Since the names are difficult, I will substitute more familiar (or shorter) terms to stand in. Please see the Appendix (yes, there is one) as needed." Thus, Ki'shto'ba would be called Kip or Kish, Is'a'pai'a could be Ike or Isa. I would definitely be easier to read.

The difficulty of maintaining immersion because of the con-lang dropped a star off the rating. In all other ways, I highly recommend both series. I look forward to reading Isa's continued quest for the golden fungus in volume 6.

Sadly this book completes the epic of 'The Labors of Ki'shto'ba Huge-Head'.
But happily, it commences Is’a’pai’a's Quest for the Golden Fungus and joy of joys, none of the twelve companions is leaving - in fact, they are joined by additional intrepid companions, so there are lots more adventures to be had.
Za'dut is still contributing to the New Times with it's inventions, speaking of which, throughout the series the author has given excellent examples of how Mankind may have developed its technologies, although it must be said that Za'dut is obviously a greater genius than Leonardo Da Vinci and deserves every surname it has been given so far.
I highly recommend this entire series to anyone who enjoys Science Fiction and Greek (with a smattering of others) Mythology because in it you will find them very cleverly combined.