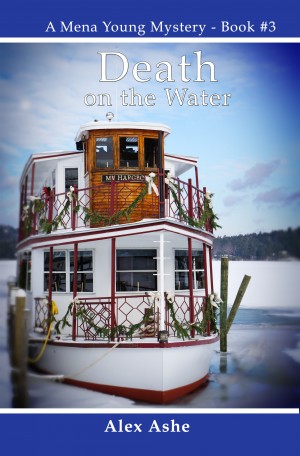 Death on the Water

By Alex Ashe
When the local cruise ship sinks unexpectedly in the frozen water, the town of Lake Pleasant springs into action to restore the ship. But there’s something more sinister going on. Investigator Mena Young, along with her colleagues, discover that not all secrets are best shared. Join Mena in her third novel, "Death on the Water."

As the author explains, it is time female private detectives stole the limelight.
“There are thousands of private detective stories out there, but ninety nine percent focus on the work of men. I wanted to show that females can be equally as cunning,” says Ashe.
Continuing, “My upcoming series of novels will feature Mena Young as the protagonist, along with a series of mysteries that would certainly leave her male counterparts scratching their heads.”
Since its launch, the book has garnered a consistent string of rave reviews.
“A shocking murder mystery filled with intrigue! A very interesting read and fantastic start to the series! I cannot wait for book 2!” says Ashley, who reviewed the novel on Amazon.
Another reader, Nika, was equally as impressed. She said that, “This was a terrific book. I love murder mysteries, and this one was gripping! Anyone who likes a murder with a twist, beware, you will be addicted!”
With so much success on her hands, Ashe refuses to lose sight of what is really important.
“Readers crave a private detective novel that is laced with mystery, suspense and a chaotic series of twists and turns. There are many wild and wonderful scenarios up my sleeve, all of which will be making it into my future books,” she concludes.
Alex's first book Death of a Player takes place in a small New Hampshire town and is available for Kindle, Nook and iBooks. Her second book Death at the Notch will be released in mid 2013 and is set in northern New Hampshire.

You have subscribed to alerts for Alex Ashe.

You have been added to Alex Ashe's favorite list.

You can also sign-up to receive email notifications whenever Alex Ashe releases a new book.