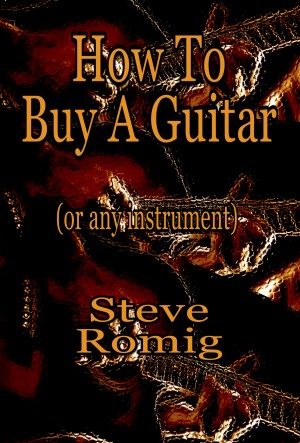 How To Buy A Guitar (or any instrument)

By Steve Romig
A simple, no nonsense guide to buying the right instrument for yourself or your children. Research over the past decade or so tells us that learning a musical instrument improves vocabulary and the ability to think laterally. It improves communication skills and learning ability in all areas. Buying an instrument that doesn't discourage the learner therefore is very important. More
I'm always amazed at how little people know about purchasing the right instrument for themselves or their children.
Worldwide research has shown that playing a musical instrument has real benefits.
For example, children who play music have improved vocal, vocabulary and memory skills by the time they become adults so So learning an instrument is a desirable thing. But,so often, I see children trying to play unplayable instruments because parents have bought an instrument not knowing the basic principles.
This is a simple guide to enable you to make good decisions and get the best value instrument whether you're a beginning, intermediate or advanced player.

I've been involved in Music Retail for the last 14 years as an "on the floor" sales person with sales of over $500.000 per annum.
I've been writing and performing for a large part of my Life.
There have been more rough patches than smooth but that's all part of the ride I guess.
Highlights have involved having John Farnham record 2 of my songs "Take You Back" and "Sometimes"

I've won numerous songwriting awards for a song called "Way Down Homeless Blues" including the ISC and Billboard awards in the blues category.
Blues performer, band and song of the year in 2007 for the same song at the Tasmanian/Victorian blues awards.
Also the Joe Bonnamassa blues song of the year in the same year.
All the above songs can be found in my music cataloge.

In 2011 I appeared on Australia's Got Talent and got through to the 2nd Semi-Final singing my own song
"Silent Wonder".
I've enjoyed some notoriety as a result and numerous hits on Youtube.
Some of these can be found on the next pages.
I've recorded and co-produced 3 of my own CD's with Mike Kelly, Doug Brady and various others.
I've played slide guitar on Glen Shorrocks acoustic CD.. Meanwhile.

I co-produced and played various instruments on Jim Keays Resonator CD.
Recorded produced, played nearly everything and did most of the backing vocal
on Twyce Daily's CD Simple Things.

You have subscribed to alerts for Steve Romig.

You have been added to Steve Romig's favorite list.

You can also sign-up to receive email notifications whenever Steve Romig releases a new book.