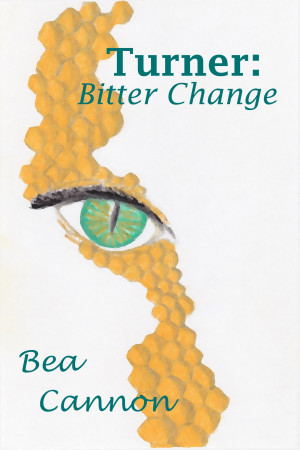 Bea was born and raised in Charlotte, NC, and though she has visited other cities and states, she has a preference for Charlotte and expects to live there for the rest of her life.

She is a teller of tales who enjoys concocting yarns of science fiction, fantasy, paranormal, and other stuff. She also relishes reading, drawing and painting, walking, and working crossword puzzles.

She is a retired electronics technician and admits to having worked at a variety of other jobs during her life, including being a dishwasher, a busgirl, a housemaid, a motel/hotel maid, working in a fast-food joint, a telephone operator, and a store clerk. There have been other, even-less-glamorous jobs, including picking cotton.

She is also a mother, grandmother, and great-grandmother who daydreams a lot and likes to dance.

Turner: Bitter Change
A story of change, and of hate, love, and betrayal; of a coming of age, and of spaceships and magic…

About the Series: Spaceships and Magic

A story of change. A scifantasy of what happens after aliens invade the Earth in the not-too-distant future and a child who changes into something else is born who can open doors into another dimension.

Also in Series: Spaceships and Magic

The best way to describe Turner is enjoyably "different".

On one hand it's a solid, professionally written Young Adult sci-fi (the first in a series) about a lonely, outcast teen coming to terms with both strange and transforming abilities and new found friends, then saving the world from alien invaders.

On the other it's what I can only describe as "experimental", in the sense that Cannon fearlessly combines elements of sci-fi with fantasy, dragons, magic, other dimensions and parallel universes, and even fairy-tales, with a teen coming-of-age/coming-to-terms-with saga. Being so "different" from your run-of-the-mill YA novel, this mixture is surprising at first, but as the story and characters grow it becomes both enjoyable and acceptable.

I've read Cannon's previous "Boucher's World" trilogy, and "Turner" carries many of the same hallmarks, but in a totally different context, which is a credit to the writer's imagination.

By hallmarks I mean that Cannon writes about heroines undergoing transformations and infuses her work with a positivity, a niceness, that, for me, can border on the utopic. In spite of her fictitious world going to s**t, she sees, or brings out, her characters' good sides. Even when they start out "evil", they're forced to change and make amends. I don't know whether this is conscious or unconscious, but for my tastes it can become a little too "sweet" in places.

We only get to see the "villains", the conquering aliens, from a distance. We get to know little about them and, in a way, they become almost tangential to the story which is as much about the different beings (humans, dragons and dragonbees) and these beings' relations with Juri, the pint-sized half-dragon, half-human heroine, as the story of the rebellion itself.

Three things that weren't to my taste as a reader:

1) One can see the engineer in Cannon's writing. A lot of thought went into the story and the plot is "tight", meaning there aren't any holes. Any that might appear are covered and/or explained satisfactorily. This is a quality, making what would be, on paper(!), a rather far-fetched story, believable. That said, there was, I felt, some unnecessary detail and explanation that sometimes detracted from the flow of the story. Somethings need a few words of explanation to be credible, and some don't.

2) Don't start reading expecting a rock'n'roller New York Times YA Bestseller type read, i.e. full of action and one dimensional kick-ass characters. As I said above, Cannon's work is about relationships, and she's very good at it. She just happens to situate these relationships in Young Adult, dystopic-type contexts. Now, I'm not saying I prefer New York Times YA Bestsellers, as I generally find them rather shallow and poorly written, but I do like "action" and "grit". I like to see the "Dark Side" affecting the heroes (and villains), and to feel the menace and threat of the underlying conflict. Cannon doesn't not do this, she just seems to focus more on the "behind the scenes", on the way the characters interact and respond to said conflict and each other. An example in point being the ending where, considering the ease with which the aliens conquered Earth in the first place, the coalition of humans, dragons and dragonbees *appear* to deal with them rather swiftly. Sure, people die and things get destroyed, but there never seems to be any doubt as to whether the coalition will succeed or not, and the fighting doesn't seem to be as important as Juri's feelings of, and reactions to, her supposed betrayal by her friends.

3) My third point is a result of the first two. The "plot" took, in my opinion, a long time to get going. We know, or we think we know, what "has" to happen - we've got a heroine and we've got an, albeit distant, villain - but I was 24% of the way through before this became explicit. Sure, there are some (I counted two) subtle "clues" that lead the reader in, but the lack of some initial conflict with the villain, something "terrible" (and personal) to make us hate and fear them and know that "they" really are the villain of THIS story, coupled with the volume of writing before we're certain we know where Cannon is going, may leave the more impatient reader confused and not really certain whether they're reading about a girl's adaptation to a new life in a dystopic world, or a girl's metamorphosis into the heroine that changes the dystopic world.

I can't say if this is a good thing or a bad thing. It's a question of taste. On one hand, writing so that the reader knows whats going to, or will have to, happen is a rather simplistic and unimaginative way of writing: "Give em what they want". Great for formulaic writing suited to the mindless masses that read what they're told to read.

On the other, when your characters are teens, and the genre can be called sci-fi or fantasy, the writer creates certain "expectations" in the mind of the average reader. To not cater to these expectations is risky.

Unless, of course, this is the writer's goal.

You have subscribed to alerts for Bea Cannon.

You have been added to Bea Cannon's favorite list.

You can also sign-up to receive email notifications whenever Bea Cannon releases a new book.