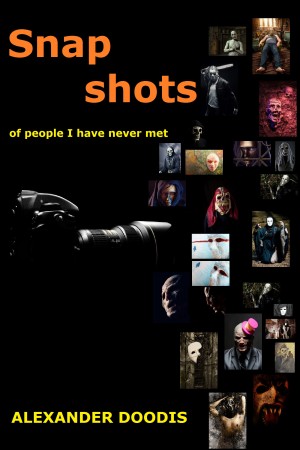 Snapshots of People I Have Never Met

By Alexander Doodis
Snapshots of People I Have Never Met is about people I have seen but never met, and my attempt to understand them. Snapshots is about real people living their evryday lives as seen by me in a coffee shop.

If only my eyes could take photos. More
The most important lesson I have learnt in life is that we are all struggling; life is complex and full of mysteries and contradictions. Snapshots is about real people. Life is a wonderful journey and i believe we should make use of theb precious time and talents we have been given. We should look at the world around us, as well as the mysteries within us, as we seek understanding and harmony within ourselves, and be thankful for each moment we have in this beautiful and painful experience we call 'life' - Snapshots of People I Have Never Met is about people I have seen but never met, and my attempt to understand them. Snapshots is about real people living their evryday lives as seen by by eyes while sitting in a coffee shop.

If only my eyes could take photos.

Alexander Doodis is the pseudonym and project of Alex Telman, one of Australia's leading spiritual healers.

I was born in Wroclaw, Poland and grew up in Melbourne, Australia before moving to Brisbane, Queensland. I hold degrees in Law, Arts and Education and have facilitated many workshops and seminars, and spoken to many groups of people as well as winning a number of poetry slams.

I have created the Doodis project to seperate my healing practice from my creative work. Doodis is especially known for his juxtaposition of orchestral and modern instrumental music. In addition to his musical output of over 500 music tracks (some of which have been for film, TV and advertising) in over 30 albums, he has written hundreds of poems.

His best known compositions include the hypnotic single Hypnotic Dreams and the romantic album Cab Sav Diva. He best known poem is The Twin Towers of Love, a tribute to the tragedy of Septembet 11; and his innivative collection, Snapshots of People I Have Never Met. Doodis is known both as a poet and composer and his reputation in both arts has continued to rise.

My poetic pursuits have been encouraged by the likes of Stanley Kunitz, Sydney Sheldon, Andy Warhol, Allen Ginsberg and Charles Bukowski; each of whom he had met during the 1970s and 1980s. Although slightly drunk, Charles Bukowsli bowed before me and pronounced that, "I am in the presence of a brilliant poet; it's a shame you will never be known,” referring to Doodis being a pseudonym and my decision to focus on my gift of healing. Allen Ginsberg sent me a number of poems before publication and we exchanged letters (yes, way before emails) analysing and discussing them.

Stanley Kunitz said to me, "Alex, you are a legend." It's a shame he wasn't referring to my writing :)

Apologies to Andy Warhol: In May of 1979 (London) you suggested I publish. You said my poetry will be 'great' when I get the 'Jewishness' out of it, when I can make my writing 'Universal'- sorry pal, but no can do. But I still remember your words to me:

"SWEET KINDNESS OF THE SOUL,

Well my friend, I still cherish those words. Bless you.

You have subscribed to alerts for Alexander Doodis.

You have been added to Alexander Doodis's favorite list.

You can also sign-up to receive email notifications whenever Alexander Doodis releases a new book.