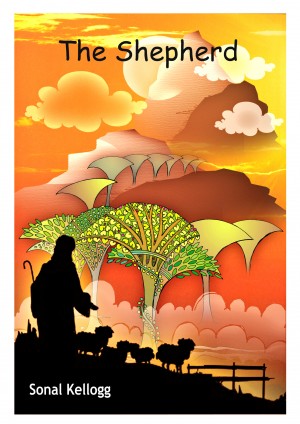 By Sonal Kellogg
This story of a shepherd and his family is set during the birth of Jesus Christ in Bethlehem 2000 years ago. Joshua is one of the shepherds to whom birth of Jesus Christ is proclaimed. The high point is when an angel tells of baby Jesus’ birth to the shepherds tending sheep. Just then, Joshua learns that his youngest child is critically ill. Joshua has to make a crucial decision More
This is the story of a shepherd and his family set in the time of the birth of Jesus Christ in Bethlehem more than two thousand years ago. Joshua is one of the shepherds to whom the angel of God gave the first message of the birth of Jesus Christ.
The story begins with the simple narration of this Jewish family who believes in the coming of the messiah. They live in a modest hut on a hillock near Bethlehem. Joshua has two daughters and two sons. It is a story of hope, struggle and triumph. It is story of strength of character and of hope in an ever present God.
It is a story about Joshua, his wife Sarah and their children Naomi, Reuben, Martha and David. Of tending sheep and selling wool and making a living while still helping their friends and keeping their faith. It’s a story about love and toil, temptation and aspiration.
The high point of the story is the day the angel of God proclaims the birth of Jesus to the shepherds who are tending their sheep in the pasture. Just after the angel’s message, Rueben, the elder son comes running to inform Joshua that his younger son David, who has been ailing for a while, has become critical. Joshua is torn between going to pay homage to baby Jesus with the other shepherds on the one hand and to be with his son David on the other hand.
The decision Joshua takes, is what shapes his future life. Read the book and find out Joshua's decision and how this affects his future and his family.

Price: $1.99 USD
Buy Add to Library Give as a Gift
How gifting works
Create Widget
Tags: christian historical childrens 10 and up
About Sonal Kellogg

Sonal Kellogg is currently working as a Content developer and a writer in Ahmedabad, India. She has worked as a consulting editor of Aim magazine for one year and a web editor for an International NGO programme.
She has been a senior journalist with various national daily newspapers for over a decade. She worked for The Asian Age and The Indian Express.
She has also worked as a television director for various commercial channels in India including Zee TV and Cinema Vision and also at Educational Media Research Centre (EMRC) where she made educational television programmes.
She has taught journalism at Delhi university and at other places.
Sonal has a masters in Development Communication degree.
She is founding member of many professional bodies like the Network for Women in Media, the Gujarat Women’s Media Forum and also a member of Indian Women Press Corps.
She is a published author. Her book, “The Shepherd” was published in print in December 2010 and released in New Delhi.
She is a mother of two girls and lives with her younger daughter and mother in Ahmedabad, India.

You have subscribed to alerts for Sonal Kellogg.

You have been added to Sonal Kellogg's favorite list.

You can also sign-up to receive email notifications whenever Sonal Kellogg releases a new book.