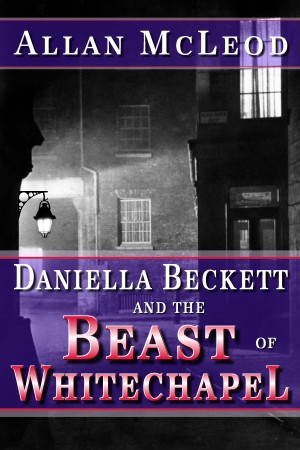 Daniella Beckett & the Beast of Whitechapel

Due to heightened tensions between the police and the people living in the East End of London the police couldn't openly admit that there was a second serial killer walking the streets of London taking the lives of innocents in the dead of night, even though this beast was far more dangerous than any which the police had hunted before.

When Daniella and her fiancé Thomas were holidaying in a quiet place a little way outside London the world seemed perfect; but when a strange and mysterious beast attacks them on the way home the world changed forever. Upon returning to London grieving the loss of her fiancé, Danielle makes an unlikely friend in a man called Theodore together and aided by a desperate police constabulary they prowl the East End of London looking for the beast who killed her fiancé.
Available ebook formats: epub mobi pdf rtf lrf pdb txt html
First 20% Sample: epub mobi (Kindle) lrf more Online Reader
pdb
Price: $0.99 USD
Buy Add to Library Give as a Gift
How gifting works
Create Widget
Tags: vampires vampire murder werewolf werewolves london jack the ripper gothic horror horror story whitechapel
About Allan McLeod

Allan McLeod was born in June 1988 and lives in Middleborough, in the UK. He is an honours graduate of the Open University, England and he has also studied at the University of Worcester and Inverness College of the University of the Highlands and Islands. He has higher educational qualifications in Natural & Health Sciences as well as Managing Care.

Allan now writes in the fields of social sciences and fiction. His interests are socializing, writing and personal fitness, including running and cycling.

Reviews of Daniella Beckett & the Beast of Whitechapel by Allan McLeod

You have subscribed to alerts for Allan McLeod.

You have been added to Allan McLeod's favorite list.

You can also sign-up to receive email notifications whenever Allan McLeod releases a new book.