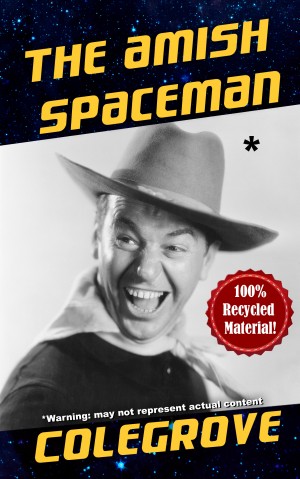 Unsatisfied with the daily grind of a Silicon Valley “business coach and life consultant,” Dean Cook weasels his way into a once-in-a-lifetime chance for fame and fortune: a speaking slot at the National Motivational Speaker’s Conference in West Virginia. Three days before the conference, Dean’s girlfriend breaks up with him and destroys his passport and identification cards. Dean’s flight plans are now scrapped, and he’s forced to steal a second hand ambulance. On the high-speed drive across the country he meets a Russian girl on the run from her fiancé, a brutal and eccentric collector of women’s hosiery. Dean and the girl escape from a series of catastrophes including a shotgun wedding in Reno, Sea MonkeysTM in the Great Salt Lake, and parachuting from a B-25 bomber over Kentucky.

Wanted on twelve systems for a crime he didn't commit, the author grew up watching anything and everything sci-fi: Battlestar Galactica, Doctor Who, Star Trek, Space: 1999, Star Wars, and The A-Team. Oh, and Airwolf. Author is elbowing me in the ribs painfully--I am to emphasize his love for Airwolf, and not screw it up by making it sarcastic or hipster-ironic like I always do. Author wishes he could fly a secret government helicopter with Ernest Borgnine behind him in the dickie seat? (That's what he said, trust me.)

Author's early years were spent running from wastelanders in the hills of southern Ohio. After college he turned away glittering job offers in food service and insurance and worked for the post office. He taught Bad English in China and Germany, became a Master of Teaching English Thing, joined an internet startup for the free lunches, learned about the science of fire (this can't be a real thing), and worked on a 911 ambulance (he's still working there, trust me). In author's free time he stays one foot ahead of the federales and gives his assistant a raise of 20,000 kopecks and a car and Diner's Club.

Author says to tell you his literary influences are Hemingway and Raymond Carver but I can see him through the basement window and he only reads garbage Star Trek fan-fic and that Alan Partridge biography over and over.

Hobbies:
Listening to the beach
Walking on Phil Collins

Best Movie I Have Been Allowed to Stay Up and Watch:
Jessie Season Two

What I'm Doing Now:
Nothing what are you doing

Reviews of The Amish Spaceman by Stephen Colegrove

You have subscribed to alerts for Stephen Colegrove.

You have been added to Stephen Colegrove's favorite list.

You can also sign-up to receive email notifications whenever Stephen Colegrove releases a new book.