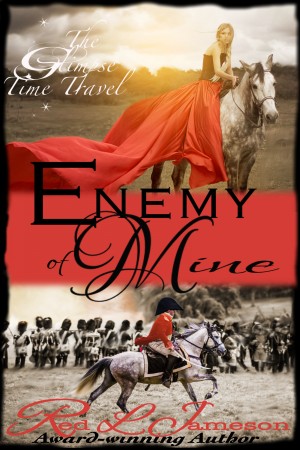 Minerva Ferguson, wakes two hundred miles and two hundred years from her apartment in General William Hill's mansion, in New York City, 1776, during war. Problem is, besides being in the wrong time, he’s not a general for the Continentals—he’s British, making him her enemy. More
Kidnapping mortals to different eras is such fun. Trickster muse sisters, Clio and Erato, call it a glimpse, but military historian Minerva Ferguson, Erva, is fairly certain she’s gone nuts when she wakes two hundred miles from her apartment. And two hundred years in the past to Brooklyn, 1776. In an unfamiliar manse, during the American Revolutionary War, she’s not too sure how to regain her sanity. Especially when she realizes whose mansion she’s just woken in, the one British general she studied more than anything else, Lord William Hill.

When Will hears Erva’s screams of panic, he breaks down a door to save her, even if he can’t quite remember why she’s visiting. She calms, though, the instant she sees him, as if they’ve known each other for eons. From the second he sees her dressed in a toga made from a bed sheet to later when she’s with his troops, wooing them with her musket skills, he realizes he’s smitten. But he’s a weary soldier, shrouded in grief, while she reminds him of a sun goddess. Is she too good for him? Lord, how he wants her to want him.

How could Erva not fall for a guy who accidentally quotes a Cheap Trick song? But now she has to get to the bottom of if Will is really a rake, how to stop one of the most important battles of the war, and lastly how to stop her insane crush on the general. After all, he’s going to die in less than a week.

Red L. Jameson lives in the wilds of Montana with her family. While working on a military history master’s degree, she doodled a story that became her bestselling, award-winning romance, Enemy of Mine, part of the Glimpse Time Travel Series. After earning her gigantic master’s—the diploma is just huge, she couldn’t stop doodling stories, more Glimpse stories—because she couldn’t get enough of hunky Highlanders and buttoned-down Brits—and other stories, a paranormal romance series and a contemporary series, which grew into the pen name R. L. Jameson, under which she writes cerebral and spicy erotic romance. While working on yet another master’s degree—nowhere near as giant as the first, she wrote her first women’s fiction novels. But no matter which genre she writes, her novels always end with a happily ever after.

She loves her readers, so please feel free to contact her at http://www.redljameson.com

About the Series: The Glimpse Time Travel

Mischievous muses bring couples together for the magic of timeless love.

Reviews of Enemy of Mine by Red L. Jameson

You have subscribed to alerts for Red L. Jameson.

You have been added to Red L. Jameson's favorite list.

You can also sign-up to receive email notifications whenever Red L. Jameson releases a new book.