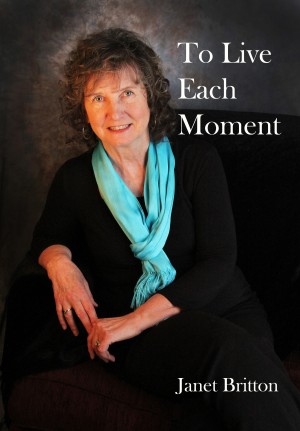 To Live Each Moment

By Janet Britton
A 33-year-old teacher and foster mother created a gift of words for her young children. Her upbeat narrative of treatment for breast cancer shows how laughter and the support of God and people help us live fully in all circumstances.
Now, three decades later, Janet reissues this book to encourage the wife of her granddaughter’s basketball coach, just diagnosed with breast cancer, also at 33. More
Janet Britton had just turned thirty-three when she found out she had cancer. Her children needed her. So did her husband. She didn’t have time for surgery, radiation treatment or chemotherapy.

But the lump was malignant, and, without her permission, Janet was hurled into a world of dazzling operating rooms, icy bedpans and endless tubes and needles. With her we experience the terror of the unknown, the exhaustion of living in a rebellious body, the frustration of dealing with insensitive friends and health-care professionals and the relief of finding others who truly understand.

Intending her story to be a gift of words for her young children, Janet describes the emotions and events of her treatment with both laughter and tears. Because cancer strikes three out four American families, few escape its effects. Cancer changes everything. It destroys some, but it can also nudge some to begin to live each moment with joy and purpose.

As Janet battles a potential death sentence, she seeks strength through God and discovers what it truly means to be alive. While others support her in her fight, Janet continues to support her own loved ones, struggling with addiction, abuse and the impact of suicide.

Now, thirty years later, after a second bout of cancer, Janet reissues her book for the wife of her granddaughter’s basketball coach, just diagnosed with breast cancer at age thirty-three. Janet encourages this young mother by pointing out the improvements of treatment in the last three decades. Janet knows that though medical protocol has changed, emotions of those dealing with cancer remain the same.

At the end of this edition, Janet updates readers on the original characters in her memoir in a new postscript titled, “Still Living Each Moment.”

Janet Britton is a former high-school English teacher and free-lance writer living on a farm in northeastern Ohio. She and her husband have two children, Renae and Neil, and two foster daughters, one deceased.
Janet Britton believed she was writing To Live Each Moment for her son and daughter to read as adults, long after she’d died. Neil and Renae were just seven and nine when she found that lump on her breast. She wrote the story for their Christmas presents, two piles of Xeroxed double-spaced paper that told the events and emotions of their mom’s treatment year.
Writing has been a part of Janet’s life since fifth grade when she wrote her first novel, The Black Horse Midnight. During her cancer therapy in 1980-82, she completed her masters in English and pioneered a writing program.
Three decades have passed. Neil and Renae have married happily. She and her husband have five grandchildren and have celebrated their 47th wedding anniversary. Writing remains her outlet. Janet is working on the second of a novel series she refers to as Inside Cinderella’s Castle, an honest look at relationships.

You have subscribed to alerts for Janet Britton.

You have been added to Janet Britton's favorite list.

You can also sign-up to receive email notifications whenever Janet Britton releases a new book.