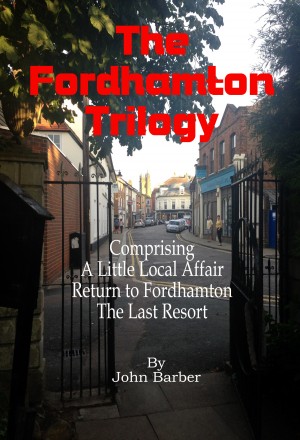 The first part of this trilogy - A Little Local Affair - is offered free at Smashwords and most other sellers. Depending on where this is purchased the whole of book one may be downloaded and most of the first chapter of Return to Fordhamton.
Available ebook formats: epub mobi pdf rtf lrf pdb txt html
First 40% Sample: epub mobi (Kindle) lrf more Online Reader
pdb
Price: $4.99 USD
Buy Add to Library Give as a Gift
How gifting works
Create Widget
Tags: secret services cozy crime stories murder mysery corporate banking english traditions
About John Barber

Also in Series: The Fordhamton Trilogy

Reviews of The Fordhamton Trilogy by John Barber