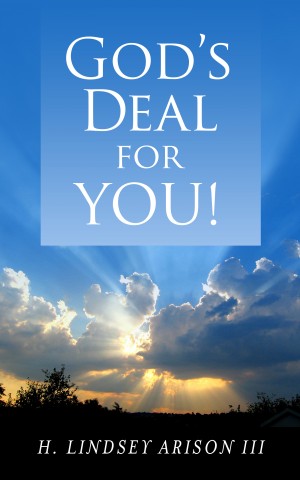 God's Deal for You!

Here are some of the chapters:
* What's the "Deal" All About?
* Each One of Us Will Be Held Accountable
* Just a Few Simple Rules ... What We Are Told to Do - And Not To Do
* Misuse of the Word "Sinner"
* What About All Those "Hypocrites" Out There?
* Once Saved, Always Saved!
* What Do Other Religions Offer?
* Other Benefits of Accepting the "Deal"
* God's Plan for Man

Lindsey Arison’s extensive professional experience includes key assignments with The Joint Staff, the Office of the Secretary of Defense, NATO, U.S. House of Representatives, White House/Office of Management and Budget, Army, Air Force, and industry. 16 of his over 43 years of Federal service were spent in the Pentagon and was there during the 9/11 attack.

Concluding his uniformed service in the Army Reserve, his capstone assignment was Acting Commander of the Capitol Hill Reserve Detachment. A disabled veteran, Lindsey also served as Commander of the largest chapter of the Disabled American Veterans (DAV) in the state of Virginia.

Lindsey received his commission from the United States Military Academy at West Point in 1973 where he earned a Bachelor of Science degree in general engineering. He also holds a master of public administration degree from Harvard University and a master of science in systems management from the University of Southern California. His doctoral research is in environmental science and policy focusing on the sea disposal of chemical weapons. In 2010 he established the Institute for Sea-Disposed Chemical Weapons.

You have subscribed to alerts for H. Lindsey Arison III.

Would you like to favorite H. Lindsey Arison III?

You have been added to H. Lindsey Arison III's favorite list.