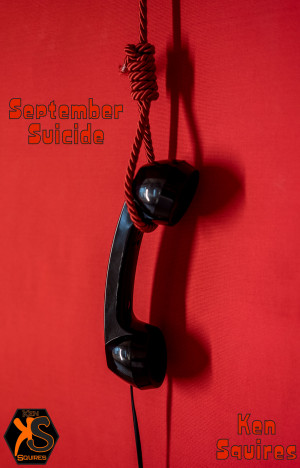 By Ken Squires
Over the course of two months (August & September 2014) I noticed a lot of celebrities in the headlines for suicide, I decided to write about it. To try and make sense of what all was happening.

Growing up as Ken was never a easy thing to do, he always had trouble making friends since he was more of a shy person than anything. As time past and he got into high school he began to get bullied and harassed.

Becoming a poet wasn't Ken's first choice for what he wanted to do in life, as his choices tend to revolve around failure.. He first started out wanting to be a Sports Broadcaster, but he later gave up on that dream when more and more he was bullied because of his speech impediment.

Which lead him to writing poetry to vent his frustrations and have his own personal outlet from the world that surrounds him, when he first started to write poetry he wrote it on a very old computer while everyone was in bed Kennie would wake up during the night and sit down at his computer and type up his thoughts and feelings for only his eyes to see, often letting out some of his deepest feelings of how he felt the world had seen him.

High School got progressively worse, to the point of him dropping out. His home life was never anything great either he never got along with either of his parents or any of his siblings.

In October 2005 just a few days after his birthday he began to talk to whom would later become his fiancee which as you could imagine brought much joy to Ken's life, but in December of that year it brought pain as his father was killed in a car accident.

Through many of his life's trials and tribulations he continues to write.

Ken started to write while he was in high school, one of his "famous" peices of writing came that he wrote as a class assignment, he was told "write about something that happens every day" so he did, he wrote how every day from the moment he got on the bus in the morning to the time he got off the bus in the evening he was constantly bullied and harassed... But things actually got worse after that, he was labeled a "psycho" as his teacher proceeded to read it out loud to the class which put Kennie in a dark place, which is where he started to listen to music such as Insane Clown Posse and Marilyn Manson, he listened to them to escape from the shit that was happening in his life.. The music was an acceptance it wasn't putting him down or treating him like shit like the rest of the world was.

Back in 1999 he dropped out of high school due to bullying and harassment that got to the point of him saying "it's either me leaving this place, or I'm not going to live to see me finish high school"

When he dropped out his home life wasn't the greatest, he rarely did see eye to eye with either of his parents and for the most part growing up he didn't really have any friends, the odd friend would come into his life but rarely did they stick around.

In late 2002 he founded Ken Squires Publishing to continue to pursue writing, being told by numerous other poets "there is no money in poetry" when he started to write his stuff would be dark and morbid, between the music he listened to and horror movies he watched it's what he felt most comfortable with...

He continued to write this way, in October of 2005 he started to talk to a girl on myspace that girl was Crystal (his fiancee) they began dating later that month.

In 2012/2013 he decided that things needed to change for him and his writing style as he was in a better place now. So he put out one big release called "End Of Poe-Hatery" to signify that part of his life is over, it's time to bury the darken past and move on...

In October 2017 him and his fiancee split, it wasn't easy on Ken in anyway and it affected him in many ways.

He's been rolling solo since then, trying to figure out what this life has in store for him as he continues to write through the ups and downs of his life.

You have subscribed to alerts for Ken Squires.

You have been added to Ken Squires's favorite list.

You can also sign-up to receive email notifications whenever Ken Squires releases a new book.