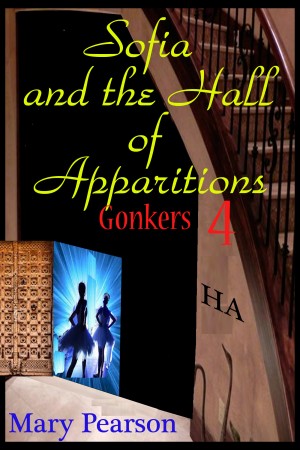 Sofia and the Hall of Apparitions Gonkers 4

By Mary Pearson
Rated 5.00/5 based on 1 review
Following the story line of the Gonkers series, Sofia finds a mysterious door under the stairs of her church basement. She opens the door and is transported back in time. Let the fun begin. This is an excellent tool for teaching Bible history for Catholics and their children.
Download: epub mobi (Kindle) pdf more Online Reader
rtf lrf pdb txt
Price: Free! USD
Add to Library
Create Widget
Tags: adventure children danger christian timetravel ballet gonkers
About Mary Pearson

Mary Pearson grew up in an enormous Catholic family with fifteen siblings. Now, she has five daughters of her own, but no boys - at least as far as she knows (wink wink). She cantors for her church and helps out with charitable functions. She's a big fan of crazy vampire romance books, well made cookies, and Jesus (not in that particular order). She decorates cakes, and once got angry and threw a wedding cake at her sister because she had enquired when it would be ready. Her sister walked out covered in frosting and told the customer that it would be a bit longer than expected, She makes up her own language with her kids, using words like cheesewunks and scrullums. She once accidently tanned her upper lip by sitting out in the sun at a strange angle and ended up looking kind of swarthy for a while, her long hair and her tan moustache lip. She is one of the two stars of Buying Tyme - a true story about her and her mother buying a rundown bakery and trying to learn to make a living with it. That story just got translated for the Chinese by some folks in Hong Kong. You can find that story, written by a positively brilliant author, here on Smashwords for free. Mary also won a bunch of academic awards and crap and graduated from the University of Minnesota with honors. She's written lots of books and plans to put some of them here for you guys, her new best friends, to cherish and enjoy, and to run with your Nooks and Kindles out into your city to show the stories to anyone you're physically strong enough to hold down and force to read them.

This was my favorite of the Gonkers series written by, arguably, the second best writer to grace Smashwords. The story was a riveting thriller about a dancer who encounters a creepy killer, a magic door that allows her to time travel, and an opportunity to save a friend. I enjoyed it very much. Just one question: will there be a Gonkers 5? Make it two questions. And will I be able to handle the anticipation?

You have subscribed to alerts for Mary Pearson.

You have been added to Mary Pearson's favorite list.

You can also sign-up to receive email notifications whenever Mary Pearson releases a new book.