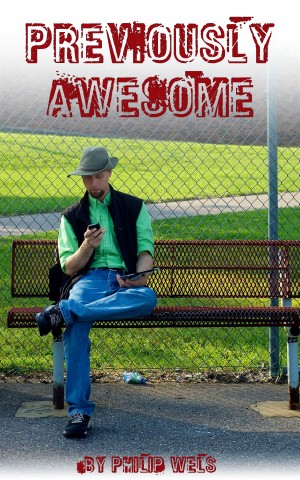 By Philip Wels
Previously Awesome is a compilation of silliness, short stories, and the opinions and ideas of a self proclaimed writer. More
This book is a bit hard to describe. It's a collection of short stories and articles that blend fact and fiction to make humorous conclusions and off the wall statements.

The content covers a wide variety of topics, each taking on various levels of seriousness and oddness. Articles will quickly change topics like a squirrel with attention deficit disorder, but the changes seem to almost come naturally.

The chapters are typically short, with a few longer stories mixed in. The pacing is varied and allows for the book to be easily picked up and put down. A few chapters are devoted to different visual gags and are very loosely considered "chapters."

Overall it is a funny book with inspiration from humorists such as Douglas Adams (rest in peace), Scott Adams (no relation), David Thorne, and John Hodgman.

Philip Wels (1987-?) a native of Minnesota, now lives in Minnesota and has a job which involves helping students and cleaning up technological disasters. Inspired by his grandma to write something and become a bazillionaire, Philip set to work on his first book planning to "create something sellable in 30 days." Three months later, he finally finished his first book "Previously Awesome." He did not receive any prizes, awards, or even bazillions of dollars for this feat, but he did get 6 likes on Facebook, and that was enough to make him happy.

You have subscribed to alerts for Philip Wels.

You have been added to Philip Wels's favorite list.

You can also sign-up to receive email notifications whenever Philip Wels releases a new book.