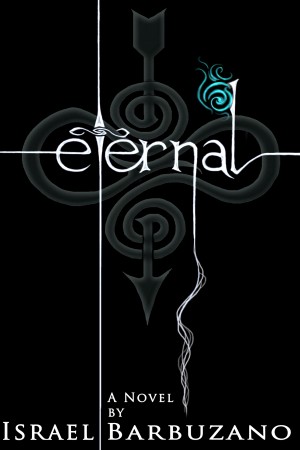 By Israel Barbuzano
Rated 5.00/5 based on 1 review
ETERNAL is a fantasy novel set in a grim yet wondrous afterlife; an afterlife shared by every species in the Universe. It's a place where humanity has no shortage of enemies, where thoughts may shape reality and ceasing to exist is a very real possibility.
Aaron and Alexandra Gretchen arrive at separate locations in this afterlife. This is the story of their quest to be reunited. More
"Until death do us part."
It was a solemn oath for them, a promise to be together until the very end.
When the blast reached them, the oath was fulfilled. Death took them, swift, ruthless.
Alexandra Gretchen thought she'd arrive at the gates of heaven.
Aaron Gretchen knew to expect oblivion.
They were wrong.
Death took them, and so began their journey.

ETERNAL is a fantasy novel set in a grim yet wondrous afterlife; an afterlife shared with every other species in the Universe. It's a place where humanity has no shortage of enemies, where thoughts may shape reality and ceasing to exist is a very real possibility. Separated upon arrival, Aaron and Alexandra will strive through it all in the hopes of being reunited...but who could keep hope alive in the realms of the dead?

ETERNAL reads like dark fantasy, but also incorporates science fiction and dystopian elements, exploring themes of faith, the resilience of hope, interspecies relations and the limits of human knowledge. It's a harrowing fight of survival; the unraveling of an ancient conspiracy; a heartwarming love story.

Israel Barbuzano is a pretty OK guy. Learn more about this fabulous person at www.israelbarbuzano.net

Reviews of Eternal by Israel Barbuzano

So it's a love stories, and the heroes die... No, I did not spoil the book to you, this actually happens on page 2.

And then, the story begins. What happens to two kindred souls, desperately in love for one another, when they land in different places of the afterlife? Want to know? Read this book. It's a Romeo & Juliet set in an universe that is completely new.

It's not heroic fantasy, it's not sci-fi, it's not anything you've read before. It's a bit of everything, and it takes the best of many writing genres.

I discovered this author when doing something I never do: read fan-fictions about another universe. I stumbled on a fan fiction called "Better Then", and it literally floored me, as it was much better than other books I have read

And the verdict is: the book delivers. It's a very good 10 hours of reading. Cherry on the cake, there are a few plot twists, and you don't see them coming from a mile away.

You have subscribed to alerts for Israel Barbuzano.

You have been added to Israel Barbuzano's favorite list.

You can also sign-up to receive email notifications whenever Israel Barbuzano releases a new book.