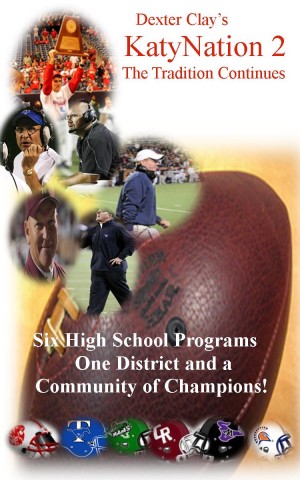 By Dexter Clay
KatyNation 2, The Tradition Continues!
Six High schools, One district and a community of Champions. More
KatyNation 2 takes a look at some remarkable community characters, head Coaches from six Katy ISD high schools and some dedicated community leaders share their stories about living in a community of champions. The sequel to the KatyNation book, these stories help to explain how the Katy community has become one of the fastest growing communities in the country. Author Dexter Clay, once living in the Katy community creates a foundation of understanding which brings to life what makes it so very special.

Dexter Clay is a native Houstonian who was educated in East Texas. He has worn many different uniforms in his day. As a free agent wide receiver for the Houston Oilers and the New York Jets National football League organizations, he cut his teeth pursuing one of the toughest professions around. In April 1986, Dexter moved to Los Angeles, California where he found himself on the Paramount Studios lot wearing a Star-Fleet uniform for Gene Roddenberry’s Star Trek the Next Generation television series. While working with the likes of actors Whoopi Goldberg, Levar Burton, and the very talented Patrick Stewart, Dexter started writing his first book, Black Eye on America, a candid and non-prejudicial look at his country.
Writing became a new desire and passion for Dexter. His second book, Walking With the Power, is the true story of Dr. Mohammad Aliakbari, a remarkable man with a unique gift-the power to heal. Dexter’s third book written (not yet published), Only for a Season, is the true story of a contractor who finds an unfinished manuscript while digging through the attic of an old house. It is the untold story of his mother’s life. Here he learns countless stories about his heritage which help to set his spirit free.
KatyNation is the latest of Dexter’s works. It is the first of a three book series which will include two movies and a television series. KatyNation is the true story of a small community’s effort to build their first high school football program back in 1939. The story moves forward through time as the little town in Texas learns that they truly have what it takes to become a community of champions. Today Dexter has brought to Los Angeles six projects which he considers quality family friendly projects both for film and television.

You have subscribed to alerts for Dexter Clay.

You have been added to Dexter Clay's favorite list.

You can also sign-up to receive email notifications whenever Dexter Clay releases a new book.