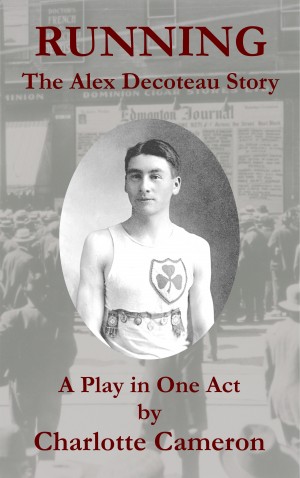 The book includes an historical note, archival photographs, and a fascinating introduction to the play and the Alex Decoteau Run, which introduced Edmonton schoolchildren to this aboriginal role model.

Attention teachers: Appropriate for Grades 5 and up (9 years and older). Free study guide at FictivePress.com

"Running: The Alex Decoteau Story" recounts the tale of Alex Decoteau, a Cree runner and Canada's first Aborigal policeman, who returned from the Stockholm Olympics in 1912 to a hero’s welcome parade in Edmonton and died in 1917 running to deliver messages between the trenches at the Battle of Paschendaele.

"No Gun for Annie" tells the story of Annie Jackson, Canada’s first policewoman, who joined the Edmonton Police Service in 1912.

Both plays premiered at The Edmonton International Fringe Theatre Festival, in 2001 and 2000 respectively.

In 2005, Charlotte and her husband moved from Edmonton, Alberta, to Gabriola Island, BC, where she became fascinated by the life of Malcolm Lowry, the famous author of "Under the Volcano." Everywhere she went on the island she encountered copies of Lowry’s book, "October Ferry to Gabriola," and once again got bitten by a bug to tell a little-known story, that of the visit of Malcolm and Margerie Lowry to Gabriola in the fall of 1946.

More about Charlotte at: http://fictivepress.com/charlotte-cameron.htm

You have subscribed to alerts for Charlotte Cameron.

You have been added to Charlotte Cameron's favorite list.

You can also sign-up to receive email notifications whenever Charlotte Cameron releases a new book.