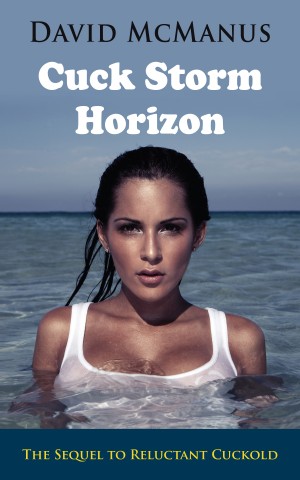 David McManus is not part of the “one percent,” but he does work in finance and lives with his wife in New York. He never imagined writing a book, but always thought that if he did, it would be about his industry. But circumstances changed. This is his first publication.

I wish the author would continue it. I am eager to learn more ... more about what happens with with Mike and with other men and women characters so skillfully introduced through the first two volumes ... And, most especially, more of the thoughts and feelings of the wife, Ashley, as she further cuckolds her husband David, gains increasing experience and pleasure dominating and humiliating him, and as more and more people, including friends and family, learn more and participate more.

(reviewed the day of purchase)
Darlene Dear reviewed on Nov. 2, 2014

The second part, "CUCK STORM HORIZON", has confirmed my initial guess, if a second part was ever published, the story would become even better. The second book deals with most of the events that motivated our request for a second book. Of course, there are descriptions of new events, further steps in Dave's path into cuckoldry, but the main addition, one that gives the reader a even more deep insight into the feelings of the cuckolded husband and the cuckoldress and one of the most erotically charged parts is what Dave and Ashley start sharing in their conversations. Those episodes are certainly wonderful, so "cuckoldryly" charged that they call for several re-readings. But there are still more titillating things... Dave's fears regarding some unusual advice or request from the cuckolder.... and the even more unusual birthday gift that Ashley wants them both to give to Mike, the cuckolder. And much more...

But there is still room for further development. This is what makes both books so interesting. I really hope for a third part or, maybe, even more parts. I would want the author to keep the same style of the first two books rather than to rush to a quick end. There is much more I want to know about Dave and, mostly, about Ashley and Mike, before the story reaches a final climax, despite of how curious I am about what the author might have chosen for the end of the story.

You can find free selections of both books (posted by the copyright owners) in at least two sites of the web (kindle format and some other e-pub formats) but you will have to register to get them or read them on line. There are also some pdf formatted selections available in the web. The full books, if you like what the selection offers, is available at several paysites.

There are also some pdf formatted selections available in the web, that are easy to find using Google search and do not require registration. The full books, if you like what the selection offers, is available at several paysites.

You have subscribed to Smashwords Alerts new release notifications for David McManus.

You have been added to David McManus's favorite list.

You can also sign-up to receive email notifications whenever David McManus releases a new book.