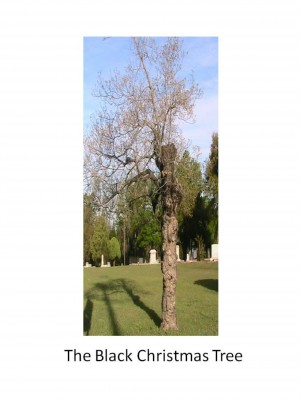 By William Morris, Sr
The citizens of an island can only find black Christmas trees because the trees have died. A young scientist must find the cause and correct the problem.

I was born in Swansea, Wales in 1945. My father was a soldier in US army while my mother was in the RAF. After the war, my mother and I moved to Oklahoma to be with my father. I grew up in Stillwater in a house that since served as a chicken coup. I attended and graduated from Stillwater schools and entered Oklahoma State University. I received my B.S and M.S. degrees in Agronomy and PH. D in Crop Physiology. After graduation I began working for a forestry company doing seedling research and nursery management. After that I began a landscaping and lawn care business which continued for 8 years. I became interested in teaching after working at a environment camp. I received my teaching certificate and began teaching high school science and coaching cross country. I taught for nineteen years and retired in 2014.
I intend to spend my retirement writing, doing church ministries and enjoying my grand and great grand kids with my wife.

You have subscribed to alerts for William Morris, Sr.

You have been added to William Morris, Sr's favorite list.

You can also sign-up to receive email notifications whenever William Morris, Sr releases a new book.