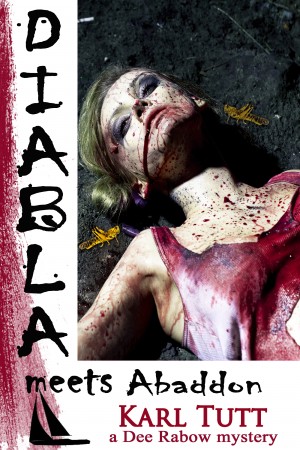 By Karl Tutt
Rated 4.00/5 based on 2 reviews
Diabla is tough. She thinks she's seen everything, but that doesn't include Abaddon. He's on a mission from God, and that mission includes murder. Two women are dead, defiled beyong imagination. If she's not careful, she'll be the third. She Ricky set out on an investigation that disgusts them as it unfolds. Unfortunately, they're the only ones who have a clear shot at bringing a psycho to justic More
Diabla Meets Abaddon is the second in the Dee Rabow Mystery trilogy. Dee and her partner, Ricky, were unceremoniously dismissed from Fort Lauderdale Police Department after some improprieties in a murder investigation. Nevertheless, they solved the case. Now they've gone private, but they're barely making the office rent. Suddenly an old love appears out of Dee's past. He decided he didn't need her before, but now he needs her more than ever. His reputation, his career, and even the life of his fiance depend on it. Unfortunately, a couple of not so innocent girls lose their lives before she can get to the bottom of it. In the meantime, she's dodging sharp objects, one determined psycho, and his own personal army.
Download: epub mobi (Kindle) pdf more Online Reader
rtf lrf pdb txt
Price: Free! USD
Add to Library
Create Widget
Tags: mystery and murder
About Karl Tutt

Karl Tutt is a retired English teacher from a dropout prevention program in Florida. He is a veteran cruiser who has published several sailing articles in national publications. His two new offerings, The Children of the Wolf and The House at Hull, continue the mastery of murder and mayhem demonstrated in the Ghostcatcher series with T.K Fleming, and his female sleuth, Dee Rabow, in the Diabla series. Quick, engaging, and satisfying . . . those words describe the approach that has lured thousands of readers to the pages of his murder mysteries. 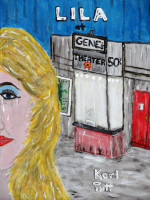 Dee Rabow and her partner Ricky run a detective agency in Fort Lauderdale, Florida. She's an ex-cop, ex-prostitute, ex-stripper known as Diabla. With that background I wondered how she was accepted into the police force. She and Ricky were partners there before both were kicked out after a vague event occurred during a case. Diabla is a beautiful, rough talking broad with a big heart who says she needs to get laid. You'd think she could find somebody to help her out with that little problem.
The writing is good with minor editing errors. The style is reminiscent of the rough and tumble detective stories of the 1940s and 50s. It's far more lighthearted and casual than I expect in a story billed as hard-boiled. The violence and rapes must be what prompted the author to choose that sub-genre.
In one on one dialog the author kept inserting the name of the person being addressed as if the reader couldn't keep tract of the back and forth conversation.
Character development was good enough for a short story. Sentence structure was mostly okay. The plot was good but rather simple.

Many side questions were left unanswered, like why the antagonist chose the victims he killed. Then there were things Diabla did in gathering evidence, breaking and entering, that would have made the evidence inadmissible in the case. In real life her shooting the perp a second time would have resulted in charges against her.

But all in all it was an enjoyable short read.

This review was unsolicited and free.
Vigilant Reader Book Reviews.

I liked this story immensely. The main character, Dee, is a tough, beautiful gal who needs to get laid. Instead she and her partner are on the trail of a psycho killer. How a woman who has been a stripper and a prostitute became a policewoman is beyond me, but she did and now she's a P.I. She's rough but likeable.

You have subscribed to alerts for Karl Tutt.

You have been added to Karl Tutt's favorite list.

You can also sign-up to receive email notifications whenever Karl Tutt releases a new book.