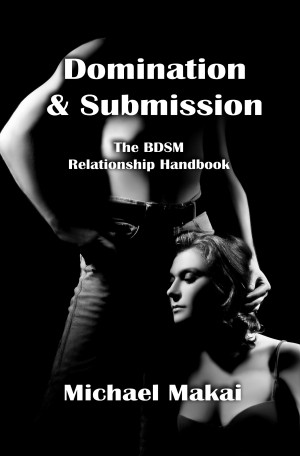 Michael is a combat veteran and a retired senior Army noncommissioned officer with over 20 years of active military service. He has worked as a marketing consultant, banker, freelance writer, magazine publisher, and internet broadband service provider. He is an incorrigible word-maker-upperer who enjoys skiing, traveling, playing Scrabble, and raising koi. He currently resides near Wichita Falls, Texas.

Review
WolfMasterSg reviewed on May 18, 2015

There is a best selling 2007 M/s book that spends an entire chapter talking about how the author likes his submissives to arrange his dinner parties. Thankfully, this is absolutely nothing like that book.

After looking in detail at different types of dominants, submissives, switches and primals (and how you might tell where you best fit in the spectrum), he gets into some hot-button issues like Gorean culture, polyamory, power exchange, consent, groups, online relationships and religion. Threaded throughout, there’s a wealth of information on forming and keeping D/s relationships (as the title suggests), and a lot of solid information on scenes, toys, fetishes and the things we do.

Along with all the factual information, there are charming asides and personal stories. One of my favourites is the story of a long roadtrip Michael did with his father. With nothing better to do while crossing two states in a car, he took the opportunity to “come out” to his Dad and explain the (D/s and poly) lifestyle he was leading. “Sex slaves?” his Dad asked. “You’re telling me you have sex slaves?”. It’s a hilarious retelling of the story of how he tries to stay reasonable and objective as his hard-of-hearing Dad becomes fixated on the fact that he has “sex slaves”.

At 496 pages, you won’t read this in one sitting, but it’s so well written that it kept me coming back for more and I did read it over the course of a weekend. The writing was so good that I even read the parts I thought I wouldn’t be interested in.

Covering everything from first meetings to breakups, it lives up to its title as a relationship handbook. I wouldn’t use the word “objective” in describing the content, because Michael’s personality shines throughout, but I’ve been involved in discussions on many of the topics covered in this book and I’d certainly call it balanced, well researched, sane and solid. There’s no bad information in here, it’s content you can rely on. It’ll be a welcome addition to your library and I’ll go as far as saying that if you’re looking for a good first book for that library, it would be an ideal place to start.

I just finished this book not too long ago and just now have been able to write a reveiw here. It is one of the best books I have ever read. Mr. Makai delivers a wealth of knowledge based on experience and research and his continued growth. From the moment I opened this book I was hooked. I have never been hooked on a book with such intensity before. I am new to the lifestyle and have learned so much from this guide. A lot about personal growth, exploration of who and what I am. Learning to give and let go, Mr. Makai delivers it all. He gives personal experiences with his input on topics. His "two cents" on things usually cracks me up. I shared with him through this book, fits of laughter, tears, heartache and honesty. I have learned so much about who I am and who I strive to be. I am so glad I've had the opportunity to read this. Very well written and with so much pull that you don't want to set it down. I finished this book in 3 days. I have just recently finished his Q62 book also. Highly HIGHLY recommend this book to anyone that is new into the lifestyle as I am.

If you're someone looking to enter the lifestyle, want to learn about it, or even to "brush" up on the relationships between a Dominant and submissive, this is the book to read. I've read several books on the subject, as both a writer of this type of fiction, but also as a newly admitted Dominant. It's a great book and I definitely give it 5 stars. I read it twice and will definitely keep it as a reference. The book is written with the male being Dominant and the female being submissive, but that is not always the case and it recognizes it. It basically uses that relationship as a generic "gender" basis for the book. Loved it and
recommend it to anyone interested.

You have subscribed to alerts for Michael Makai.

You have been added to Michael Makai's favorite list.

You can also sign-up to receive email notifications whenever Michael Makai releases a new book.