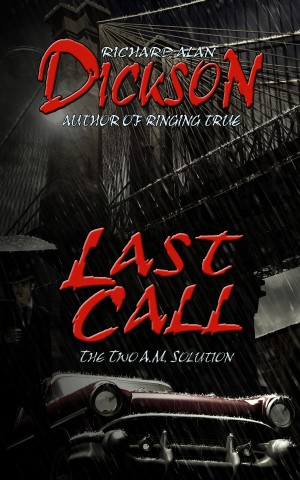 Richard Alan Dickson, author of "Ringing True," takes another look at one of history's most puzzling disappearances. With vivid characters, a touch of humor, and a nod to many of the urban myths that have developed over the years, "Last Call," is wonderful entertainment that readers will enjoy from beginning to end.

Richard Alan Dickson's writings range from the traditional science fiction, like "G-Blade" and "Gateway: Left Behind," to the more whimsical "Love, Venusian Style" and the Cat Patrol Delta series.

He also writes stories for young adults, with titles like "Mister Majestor's Magnificent Menagerie" and "Diver Down!"

The kids and the young-at-heart are represented, too, with stories such as "The Last Great Case of the Sunny Hills Detective Agency" and the short, "Hank the Happy Snowman."

Before becoming a full-time fiction writer, Richard spent twenty years in the business world. After a hungry stint as a fresh-faced stockbroker, he set aside the glamour of Wall Street—along with the thousands of friends he’d made during dinner-hour cold calls—to work as an accounting assistant in the Seattle office of a reinsurance company (yeah, he had to look that word up in the dictionary, too).

Once on the corporate ladder, Richard proved that his years spent climbing trees hadn’t been a complete waste of time by quickly climbing to department manager. But corporate winds are no less predictable than any other wind, and climbing in the wind is seldom a good idea. He suddenly found himself on the wrong side of the country when his company was forced to relocate ten years later.

They regrouped in New England.

He remained in the Northwest.

Waving good-bye to the moving vans as they motored down the road, Richard carefully considered his next career. He became a corporate consultant and ran himself happily ragged for the next nine years, traveling the country and racking up more frequent flyer miles than even a CPA could conveniently count.

Richard’s final years in Corporate America were spent in a Fortune 500 insurance group. As a VP, Controller, and then an acting CFO, he traveled from one coast to the other putting the lessons he’d learned as a consultant to good use.

His current career as a fiction writer takes him much further than any jetliner ever could, and he seldom needs to leave his writing loft to get there.

You have subscribed to alerts for Richard Alan Dickson.

You have been added to Richard Alan Dickson's favorite list.

You can also sign-up to receive email notifications whenever Richard Alan Dickson releases a new book.