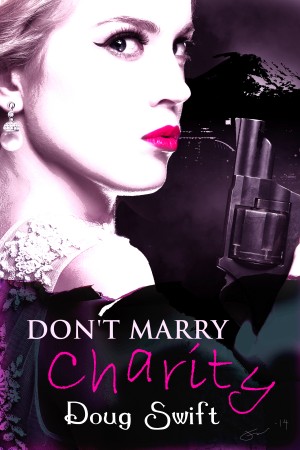 By Doug Swift
Rated 5.00/5 based on 4 reviews
Comedy adventure. Who is this woman? Why is she in trouble? Can anyone save her? Does anyone want too? More
How can Dusty stand it? Will he have to marry Charity to save her? The more he tries to help, the worse things get. She's so embarrassed by him, but she's in distress and needs him. Is there more to Charity than meets the eye? He can't help falling in love with her. Can he save her? Does she really want to marry him?

Doug Swift is an author of adventure novels and an aerospace engineer experienced with a variety of military space and defense programs. He has engineering degrees from the Air Force Academy (BS), University of Southern California (MS), and Missouri University of Science and Technology (PhD).

Doug was born and raised in Oklahoma. He and his wife, Jacquelyn, currently live in the beautiful Pacific Northwest near Mt. Rainier. They are parents to eight wonderful independent children. They love adventure and enjoy hiking, traveling, playing with the kids, reading, and learning new things.

Doug has hiked all over the world, from the top of Half Dome to the bottom of the Grand Canyon, from the crater of Mt. Fiji to the ruins of Maachu Picchu, from the outback of Australia to Stonehenge in England. Doug has jumped out of airplanes, shot a tank with an M72 LAW shoulder rocket, rode a camel alongside the pyramids of Giza, scuba dived and snorkeled at the Great Barrier Reef, trained in Taekwondo judo and boxing, journeyed to the lost city of Petra, flown solo in jet aircraft, survived POW training camp, turned off the lights at the Louvre in Paris, graduated from Army Commando Training, zip-lined amid monkeys in Costa Rica, operated mission consoles during Space Shuttle and Titan IV launches, explored Temple Mount in Jerusalem, been lost in the jungles of the Daintree Rainforest, served as a Captain in the U.S. Air Force, flown in B-52 bombers, and wrote a PhD dissertation on artificial intelligence. He is the author of eight novels

This is a great book! It is just a very fun and clean action book. I can't wait for the sequel!

I thoroughly enjoyed this book. Very humorous, a thrilling story. Keeps you guessing.

Excellent read! I really enjoyed reading this book (I looked forward to my time on the train each day so I could find out what would happen next)! Dusty is a great character and I hope there will be future "misventures" to read about.

I really enjoyed this book! It has everything you want in a book; action, adventure, comedy, romance. It has unexpected plot twists, and keeps you wondering what is coming next. It was a very entertaining read!

You have subscribed to alerts for Doug Swift.

You have been added to Doug Swift's favorite list.

You can also sign-up to receive email notifications whenever Doug Swift releases a new book.