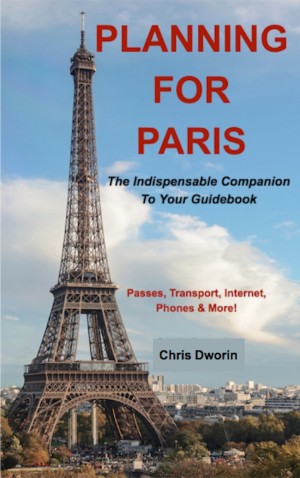 Planning for Paris - The Indispensable Companion To Your Guidebook

Whatever guidebook to Paris you’re relying on will have some information about how to get around the city, what museum passes are available, etc., and may touch on practicalities. But, they never go far enough!

It’s easy for those other guidebooks to say “pack light” or “Take the RER into Paris”. It’s a whole other thing to be a mystified tourist, jet-lagged, in a place you don’t know, surrounded by people who often don’t speak English, trying to figure it all out on the fly. You want to have a blast on your vacation, or a successful business trip without using up your entire anxiety quotient just trying to exchange money or get to your hotel. The solution is Planning for Paris - The Indispensable Companion To Your Guidebook.

This guide’s different. It’s a step-by-step planning tool and a detailed reference guide for all those decisions you’re going to be making (even though you didn’t realize it!) about:

a) Which museum and transportation passes and tickets are worth buying, and which aren’t
b) Where and how to buy your Euros
c) What to pack and what to leave home
d) What preparations to make for any phones, tablets, computers or other electronics you plan to bring

That’s just the start. We cover the myriad details that will help you save hundreds of dollars and countless hours of wasted time in Paris. And, as a bonus, we’ve included over 100 photos of Paris!

a) How to use the metro, buses, RER, and trains
b) How to get to and from the airports
c) How to protect yourself from scammers and pickpockets
d) Suggestions for preparing your home for your absence
e) A checklist for your final day at home
f) Maps of the critical transit points
g) Lists of important phone numbers to have handy
h) Handy apps to have on your phone/tablet
i) Handy words and phrases for navigating public transportation
j) Handy words and phrases in case of emergency
k) How much and whom to tip
l) A letter in French and English for your kids to carry in case they get separated from you

The sooner you start using this guide, the easier your trip planning will be, but most of the content is just as useful once you’ve arrived in Paris. So, be sure to take this guide with you as a reference tool!

This guide is published by Trekkel, an online travel planning tool that lets you easily create a personalized plan for deciding what sights, activities, shops, restaurants, activities and more that you’ll definitely want to make a part of your experience.

I've been a travel bug for a long, long, time. It all began when my father, a schoolteacher, took us to Paris for a year on his sabbatical when I was 7. My first recollection of that trip was flying across the Atlantic on a Lockheed Constellation, a four-propellor plane that had to stop in Greenland to refuel.

Seven years later we went on another sabbatical year to Paris, where I was enrolled in a French public school. That trip we made our way across the Atlantic on the Queen Mary. Funny story about how the ship got its name; see the end of this bio! :)

As an adult the travel bug lay dormant until my early 30's, and then kicked in with a vengeance and I started taking long vacations every year or so throughout Europe, parts of Asia, and North America. Some of the highlights of my lifetime of travel were visiting Mount Athos on Greece's northern border, driving 2,000 km around Turkey during the first Gulf War (I was one of the very few tourists there at the time), spending Golden Week in Nara, Japan, four months of living and traveling in New Zealand with my darling wife, traveling throughout France and England, visiting Prague and Budapest before the fall of the Berlin Wall, and crossing through Checkpoint Charlie in Berlin just after the Wall was built, among so many other wonderful memories. I also managed to carve out another year in Paris to celebrate my 40th birthday, talking my employer--the University of California--into letting me telecommute from Paris for the year. That was long before the internet made that kind of thing easy!

That love of travel eventually culminated in the launch of Trekkel (www.trekkel.com), a personalized travel planner that helps you decide on the sights, restaurants, activities, shops and hotels you plan to visit. We've been featured in the NY Times travel section, LA Times, Chicago Tribune, International Business Times, Travel Weekly, Smarter Travel, and many more.

So, I've had some experience with guidebooks, and one of the things that they never quite covered to my satisfaction were the details behind the practical information they'd impart. The guidebook would tell me, for instance, to pick up the airport bus on a certain street. Then I'd waste 10 minutes frantically wandering around trying to find the exact location before the bus left without me. Or, I'd have friends ask about museum passes, and I'd spend some time discovering that there were many options, and which was best depended on their particular circumstances. So, I decided to pull together all this information and more into one comprehensive guide to those practicalities. That's how Planning for Paris - The Indispensable Companion To Your Guidebook was born. I hope that this will be the first of a series covering major cities.

I hope that you'll use the Planning for Paris guide, and Trekkel. Please do let me know if you do, and if you have any feedback for me. I'd appreciate hearing it!

Of course, I've done other things in my life: attorney, ceramic artist and sculptor (www.paxceramica.com), author, editor, and inventor among them. But, I keep on traveling.

Now here's that story about how the Queen Mary got its name. The shipping line (Cunard and White-Star LInes) had usually given its ships a name ending in "ia" (the Laconia, the Mauretania, the Aquitania, etc.). When the Queen Mary was built, it was to be christened by the King of England at a big ceremony. His plan was to name it The Queen Victoria. But as he waxed on during his speech about how he was naming the ship after the greatest queen in British history, his wife (Queen Mary) jumped in before he could finish and said something along the lines of "How wonderful! You're naming the ship after me--the Queen Mary". To avoid extreme embarrassment and family discord, presumably, the king decided he'd better go with the flow, and that's how the Queen Mary got its name!

About the Series: The Indispensable Companion To Your Guidebook

The Indispensable Companion To Your Guidebook series gives you the information you need to deal with the hundreds of practicalities involved with planning your trip and getting the most out of your experience. The first three books in the series are Planning for Paris, Planning for London, and Planning for Amsterdam.

Whatever guidebook to those cities you’re relying on will touch on practicalities. But, they never go far enough!

It’s easy for those other guidebooks to say “pack light” or “Get a Museum pass”. It’s a whole other thing to be a mystified tourist, jet-lagged, in a place you don’t know, surrounded by people who may not speak English, trying to figure it all out on the fly. You want to have a blast on your vacation, or a successful business trip without using up your entire anxiety quotient just trying to exchange money or get to your hotel. The solution is The Indispensable Companion To Your Guidebook series.

These guides are different. They're a step-by-step planning tool and a detailed reference guide for all those decisions you’re going to be making (even though you didn’t realize it!).

Also in Series: The Indispensable Companion To Your Guidebook

You have subscribed to alerts for Chris Dworin.

You have been added to Chris Dworin's favorite list.

You can also sign-up to receive email notifications whenever Chris Dworin releases a new book.