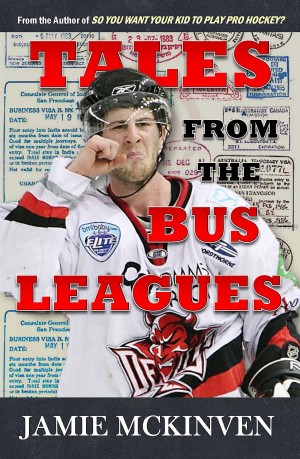 Tales from the Bus Leagues

Jamie McKinven, author of “So You Want Your Kid to Play Pro Hockey?” and "Tales from the Bus Leagues," is a former professional hockey player who played in the NCAA, ECHL, Central Hockey League and Europe. After hanging up the blades, McKinven spent parts of four years coaching at the Jr. A level and is currently heavily involved in skill development.

Over his career, McKinven scratched and clawed, sacrificed and laid it all on the line only to fall short of playing in the NHL, experiencing his ultimate dream. Along the way, while riding the buses, living paycheque to paycheque and spending the summers living in his grandmother’s basement, he discovered a great deal about life, love and the value of following through on a dream. Jamie McKinven was a star as well as a healthy scratch. He won a championship and finished dead last. Scored an overtime winner and cost his team a game, and through it all, experienced a lifetime of memories that spanned two continents, seven countries and eight leagues.

You have subscribed to alerts for Jamie McKinven.

You have been added to Jamie McKinven's favorite list.

You can also sign-up to receive email notifications whenever Jamie McKinven releases a new book.