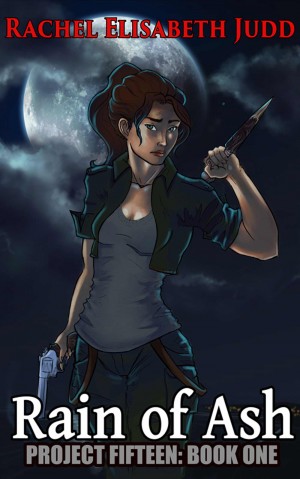 By Rachel Elisabeth Judd
Rated 4.00/5 based on 1 review
When Gwen's sister Lydia mysteriously vanishes, Gwen spends three years wondering where she went. When Lydia does finally return, she brings with her a world Gwen can barely believe. Does Gwen have what it takes to be a vampire hunter? And will she uncover the right person's secrets before it's too late and Gwen loses the people she's closest to? More
Three years ago, after a terrible fight with her father, Lydia Bradshaw vanished without a trace.

Her younger sister Gwen never gives up hope, though, waiting for Lydia to eventually come home.

But when Lydia finally does resurface, it's not what Gwen expected. Lydia's changed in her time away, in ways Gwen can barely understand. After her family home burns, Gwen gets taken in by a cadre of vampire hunters who call themselves Project Fifteen. They welcome Gwen, teaching her how to hunt and fight vampires. And Gwen embraces the opportunity to take revenge on the vampires who have hurt her family.

Hello, and thank you for checking out my work! Rain of Ash is the first entry into a transmedia project all about vampires, vampire hunters and the magic of the city.

I currently live with my beloved partner in Los Angeles, where I enjoy craft beer, crafting with friends and being a giant nerd.

Reviews of Rain of Ash Project Fifteen: Book One by Rachel Elisabeth Judd

One of the most dangerous tropes to come of the successive generations of vampire fiction is the concept of the “Super-Hunter”. From Van Helsing, to Blade, to Buffy Summers, we see an endless parade of invincible mega-hunters slaying hordes of the undead with their fantastic powers. With Rain of Ash, Rachel Elizabeth Judd shows us a world where those fantasies are as baseless as faith in Santa Clause or the Easter Bunny.

Gwen Bradshaw begins with the tale of loss we’ve come to expect from the hard-boiled protagonists of genre prose: a lost sister, a dead family, and training at the hands of skilled hunters. This is where she departs from the usual fare and where Ms. Judd takes us into a scathing critique of the norms of supernatural horror.

Vampires are better than people. They’re just as smart, twice as fast, and a whole lot stronger than any human will ever be. There are no magic Slayers keeping humans safe in their beds. If hunters want to take down one of these beasts, they have to work as a team and expect losses.

Ms. Judd imbues each member of Project 15, the rag-tag band of hunters, with hopes, history, and dreams. They act as reminders of the many walks of life that can be destroyed by the whims of fate. Everyone is treated with respect, but no one is safe. Only Gwen, acting as the voice of the novel, is truly sacred, everyone else has an appointment with the chopping block. Some will survive Rain of Ash, sure, but that just means their number has not yet come up.

If you are tired of being coddled by supernatural horror fiction which relies on comic superheroes to save the day, then Rain of Ash is the novel for you.

You have subscribed to Smashwords Alerts new release notifications for Rachel Elisabeth Judd.

You have been added to Rachel Elisabeth Judd's favorite list.

You can also sign-up to receive email notifications whenever Rachel Elisabeth Judd releases a new book.