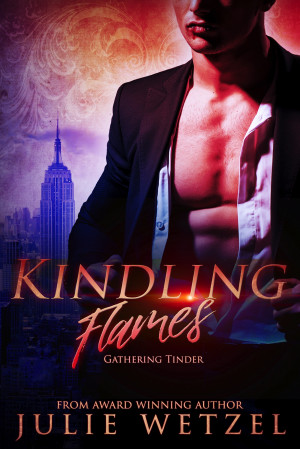 By Julie Wetzel
Rated 4.17/5 based on 6 reviews
After landing a job as assistant to a handsome CEO, Victoria Westernly feels like her life is finally on the right track. But when she discovers her new boss is the city's most powerful vampire, she'll have to decide whether her attraction to him is worth the risk… More
Fresh from college and with no real work experience, Victoria Westernly considers herself lucky to land the coveted position of personal assistant to Darien Ritter, the CEO and owner of a multibillion-dollar company. His busy schedule and eccentric ways are enough to keep her on her toes. But, all is not what it seems when she discovers the handsome man employing her just happens to be the most powerful vampire in the area.

Originally from Ohio, Julie always dreamed of a job in science. Either shooting for the stars or delving into the mysteries of volcanoes. But, life never leads where you expect. In 2007, she moved to Mississippi to be with her significant other.

Now a mother of a hyperactive red headed boy, what time she's not chasing down dirty socks and unsticking toys from the ceiling is spent crafting worlds readers can get lost it. Julie is a self-proclaimed bibliophile and lover of big words. She likes hiking, frogs, interesting earrings, and a plethora of other fun things.

About the Series: The Ancient Fire Series

After landing a job as assistant to a handsome CEO, Victoria Westernly feels like her life is finally on the right track. But when she discovers her new boss is the city's most powerful vampire, she'll have to decide whether her attraction to him is worth the risk…

The Kindling Flames Series is a paranormal romance saga with over 2,300 five-star reviews on Goodreads. Dive into a series filled with sexy vampires, werewolves, shifters, Fae folk, and more. Science fiction and urban fantasy romance lovers unite because this series has seven exciting books that readers have compared to other popular vampire romance novels such as: A Shade of Vampire Series by Bella Forest, the Immortals After Dark Series by Kresley Cole, The Sookie Stackhouse Novels (True Blood) by Charlaine Harris, The Twilight Saga by Stephenie Meyer, The Vampire Academy by Richelle Mead, and The Black Dagger Brotherhood Series by J.R. Ward.

I quite liked how new and competent Victoria handled her violent and less-than-pleasant introduction to the world of paranormal beings. (Rupert and Michael are lucky to be alive.) Though traumatized, she still manages to maintain her composure with minimal (and understandable) tears. Darien really lucked out when he hired this particular personal assistant. The slow burn romance developing between them is sweet, tender and surprising. I want to see how Victoria ends up fitting into Darien's world, and not as his assistant.

I enjoyed this free edition. Vicky and Darien have a chemistry that is stronger than they both want to acknowledge. Their romance develops at a steady pace which is refreshing compared to how fast modern books go from introduction to bedroom scenes.

Kindling Flames is the first part of a two-parter that I beta read. Normally I hate cliffhangers, but was told the book was too long to publish in one book. The second book, due out on Oct 3, completes the novel, but I hope not the series. The characters feel real. They react as I could see myself react in the same situations. The writing draws you in with its, sometimes, whimsical turn of phrases. I started reading it just before bedtime and looked up to see it was 2 AM! Though I had to work at 8, I still couldn't put it down. The second book is even better, so if you enjoyed the way this book was written, you will love the conclusion. Normally I would give a cliffhanger, at most, a 4 star rating, but the story line and author's voice make it worth 5 stars.

I found this book free on Smashwords and thought I'd give it a go and I'm so glad I did.
Darien Ritter maybe the CEO and owner of a multimillion dollar company but he's also a very old and powerful vampire but he's suffering the very human issue of finding a good efficient personal assistant, he was very happy with the one he had but she happened to get pregnant and with triplets no less and is laid up in bed, the inconvenience it's causing him. His own personnel office has offered up six candidates and the forth from the agency is waiting, how difficult can it be to get someone who can do their job well. And this is how Victoria Westernly enters the life of Darien Ritter, she surprises him at every turn and he wonders how he ever managed without her.
While Darien and Victoria get to know each other, over on the south side of town murders are taking place, fires are raging and people are going missing.
This was a surprisingly interesting read, if I'm being honest I only intended to skim the first few pages to see it was something I'd read in the future but once I'd started I just couldn't stop, I was hooked. The characters are great, not just Darien and Vicky but the supporting ones as well and I loved the story.
The only thing I really had an issue with was the 'city burning pictures' at the start of each chapter they looked cheap, awful and outdated in fact if it wasn't for the fact that I was completely hooked by the time I reached chapter two I'd have stopped reading. I'd hoped that the one for the prologue and the one for chapter one would be it, I still can't believe that such a good book has those tacky pictures at each chapter, I've got my fingers crossed that they're not in the next book, maybe they looked worse because I read this on my iPad and not my kindle so they were bigger, I don't know but they annoyed the hell out of me.
Why 4 stars and not 5, firstly the 'pictures' and secondly the unannounced cliffhanger.
Straight onto the next book for me....
Or not as I've just found out, I noticed reviews on Goodreads so assumed it was available but it's not out in ebook form until 3rd October the paperback release was 19th September.
###Genevieve I agree with you I hate unannounced cliffhangers but they're such a regular occurrence these days, I mean how difficult is it to just put 'ends on cliffhanger' or ' not complete book'

I enjoyed the writing but it should be made clear that this is NOT the full story and ends in a cliff hanger. I really can not tolerate this type of "writing" or "publishing". I will be deleting it form my ebooks. The story was good but just the fact that it isn't the WHOLE story is reason enough for me to skip this and any others by this publisher if they're going to play this aggravating game with people. I'm giving it 3 stars but because of the cliff hanger and the fact that I wasn't informed up front that it was only some of the chapters of a whole story I'm deducting 2 stars as a penalty. A word of warning to the publishers at large. Many people are getting tired of this ploy of only giving them part of the story and the greed that is apparently rampant is a big turn off to many. Stop this deplorable deception to the readers and publish whole and intact stories. If your "authors" can't write another complete story with the same or even added and different characters then you need to get better "authors".

You have subscribed to Smashwords Alerts new release notifications for Julie Wetzel.

You have been added to Julie Wetzel's favorite list.

You can also sign-up to receive email notifications whenever Julie Wetzel releases a new book.