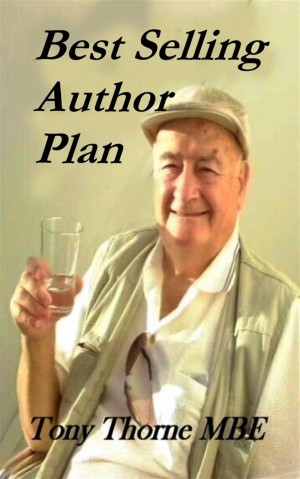 By Tony Thorne MBE
Rated 4.00/5 based on 1 reviews
Just what budding authors need to inspire then to succeed. This book is an autobiographical outline of the author's on-going progress, plus an account of an alternative plan that worked successfully for one audacious writer. More
Do aspire to become a successful writer and sell a lot of books?
The competition is becoming fiercer, and nowadays editors and agents must suspect there are more writers around than readers... so what can you hopeful, eager, first time authors do about it?
This modest little book will inspire you to get things going... and to succeed, whatever your age..!

One reader said: "Absolutely inspiring! It proves that there's no age limit -- either lower or upper -- if one truly loves
writing and works hard at their craft."

This eBook is in two parts. The first is an account of the author's 'plan' to succeed and how far it has got him.

The second part is a study of another optimistic writer's plan to succeed, all about how he put it into action, and how it finally
brought him success.

I am an Englishman, born and technically educated in London, England, and now living in Austria; but in the winter, in the warmer Canary Island of Tenerife. I originally qualified as a Chartered Design Engineer, specializing in Applied Physics products.
For developments in the field of low temperature (cryo)surgery instruments, and very high temperature (carbon fibre) processing furnaces, the Queen awarded me an MBE.
Earlier in life I also wrote and sold science-fiction and humorous stories, was an active SF Fan, and a spare time lecturer for the British Interplanetary Society. Now retired I write quirky speculative fiction; mostly tall Science Fiction and Macabre tales, with over 100 short stories published in various collections, including MACABRE TALES, THE BEST OF THE TENERIFE TALL TALES, THE JUNIOR PHILOSOPHY SOCIETY, BEST SELLING AUTHOR PLAN etc.. The first 4 volumes in my near future, 5 stars SF espionage series for general readers, POINTS OF VIEW, are now available from Amazon, Smashwords etc. My best selling title, THE SINGULARITY IS COMING, is published in English and Chinese versions. 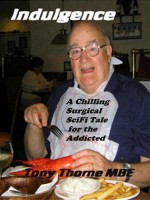 Very inspiring book, but I have issues with the story of the maverick writer

This book has one of the best lines I've ever read, "Trials and tribulations presumably scatter in the breeze with the dust of the thing as it crumbles in your fist, or shatters under your heel." Wow, truer words were never said before. The intro that explains why you might consider writing as a therapy is quite humorous and original; I know that you can use writing for therapy, but I have never seen it explained like this anywhere else before. The autobiographical note is extremely inspiring; any wannabe writer who is on the fence about taking the plunge should read it and especially re-read this passage several times - "if you don't have the time to be a perfectionist, there can be contentment in accepting adequacy, defined perhaps as the acceptable limit of one's abilities. I also suspect that the trick is to never give up until you get as far as you truly believe you can, or maybe stop just before that." What follows is an account of a how a person became a bestselling writer - the account illustrates the aforesaid passage quite well.

My issue, with the story of the maverick writer, is that he follows a rather unethical route of using the signature of an eminent writer in order to build his own career, something that I would never do, would I?

You have subscribed to alerts for Tony Thorne MBE.

You have been added to Tony Thorne MBE's favorite list.

You can also sign-up to receive email notifications whenever Tony Thorne MBE releases a new book.