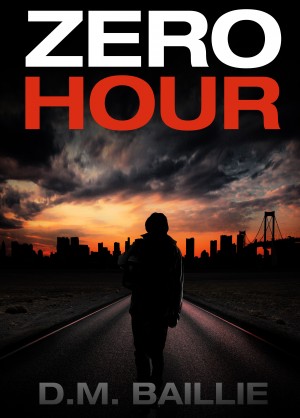 D.M. Baillie is a young Scottish novelist originally from Glasgow. His first novel Time To Kill, was published in late 2012, a crime thriller about a young man faced with drastic choices for something that happened in his mysterious past. His second novel, Zero Hour, is due for release on the 20th October 2014, a post apocalyptic story of a man trying to walk across the USA after a devastating nuclear attack. Some of D.M. Baillie's favourite authors include James Patterson, Chris Ryan, Terry Goodkind, J.K. Rowling and George R.R. Martin. A graduate from the University of Glasgow, D.M. Baillie has spent over ten years in the Aerospace Industry and has worked on various Aircraft Projects. Also an avid lover of outdoor pursuits such as rock climbing, gives him inspiration to create hair raising, thrilling novels that take you on a rollercoaster ride from start to finish.

You have subscribed to alerts for D. M. Baillie.

You have been added to D. M. Baillie's favorite list.

You can also sign-up to receive email notifications whenever D. M. Baillie releases a new book.